March on Washington for Jobs and Freedom [tri-fold publicity flyer] 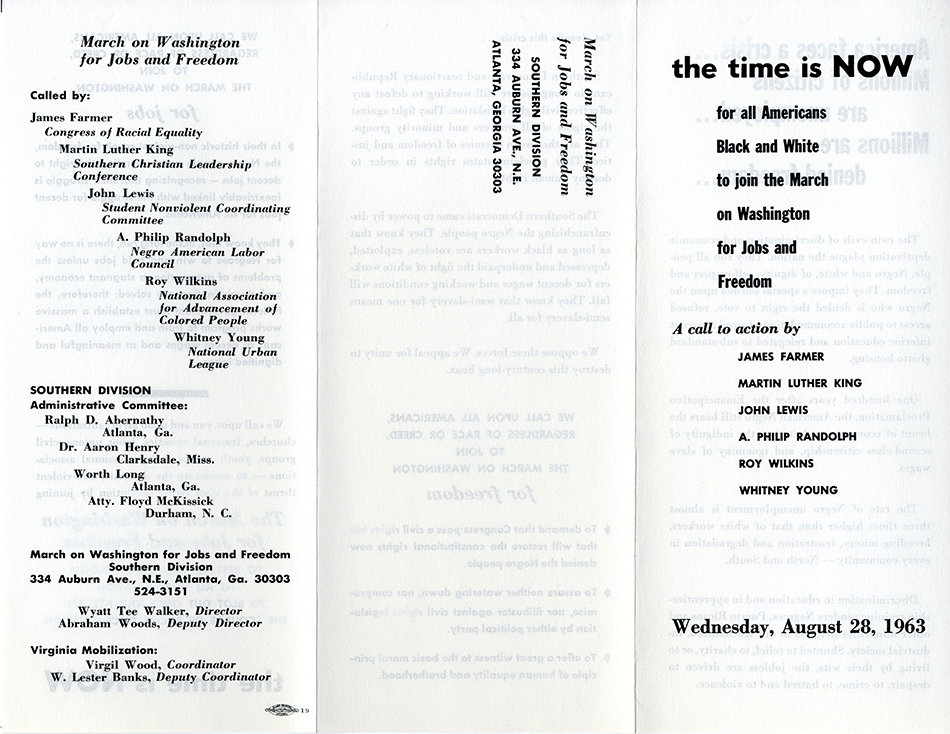 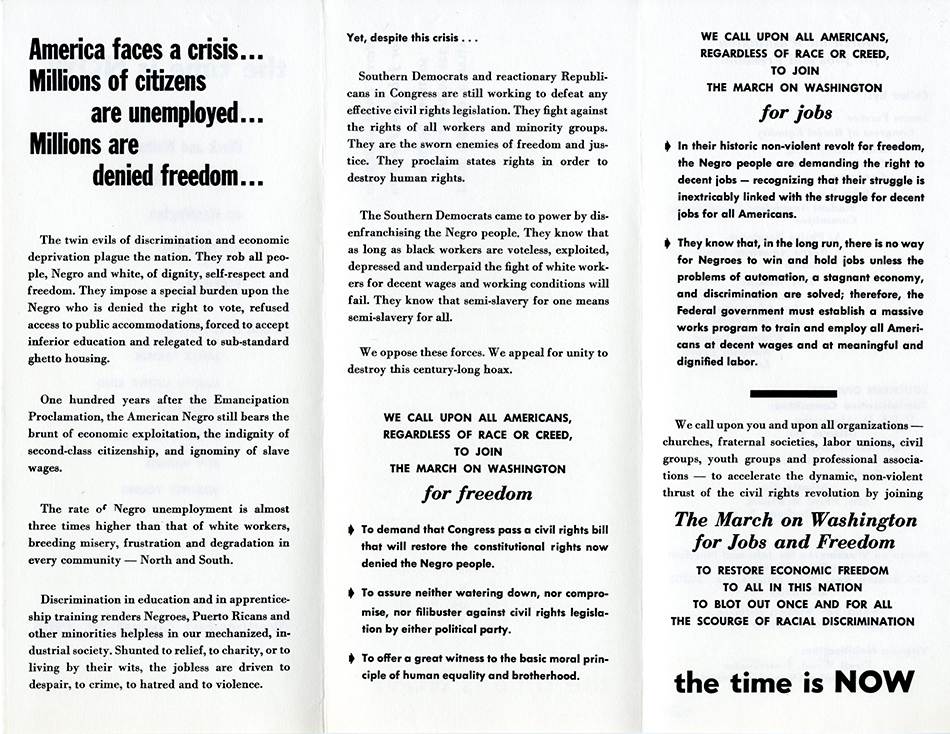 March on Washington for Jobs and Freedom [tri-fold publicity flyer]

Tri-fold flyer encouraging all Americans to join the March on Washington which would take place on Wednesday, August 28, 1963.

"The time is NOW for all Americans Black and White to join the March on Washington for Jobs and Freedom. A call to action by James Farmer, Martin Luther King, John Lewis, A. Philip Randolph, Roy Wilkins, Whitney Young. Wednesday, August 28, 1963."

Text from inside flyer:

"America faces a crisis...
Millions of citizens are unemployed...
Millions are denied freedom...

The twin evils of discrimination and exonomic deprivation plague the nation. They rob all people, Negro and white, of dignity, self-respect and freedom. They impose a special burden up the Negro who is denied the right to vote, refused access to public accommodations, forced to accept inferior education and relegated to sub-standard ghetto housing.

One hundred years after the Emancipation Proclamation, the American Negro still bears the brunt of economic exploitation, the indignity of second-class citizenship, and ignominy of slave wages.

The rate of Negro unemployment is almost three times higher than that of white workers, breeding misery, frustration and degradation in every community -- North and South.

Discrimination in education and in apprenticeship training renders Negroes, Puerto Ricans and other minorities helpless in our mechanized, industrial society. Shunted to relief, to charity, or to living by their wits, the jobless are driven to despair, to crime, to hatred and to violence.

Yet, despite this crisis...
Southern Democrats and reactionary Republicans in Congress are still working to defeat any effective civil rights legislation. They fight against the rights of all workers and minority groups. They are the sworn enemies of freedom and justice. They proclaim states rights in order to destroy human rights.

We oppose these forces. We appeal for unity to destroy this century-long hoax....

We call upon all Americans, regardless of race or creed to join the March on Washington for freedom.

We call upon all Americans, regardless of race or creed to join the March on Washington for jobs.

-------
We call upon you and upon all organizations -- churches, fraternal societies, labor unions, civil groups, youth groups and professional associations -- to accelerate the dynamic, non-violent thrust of the civil rights revolution by joining