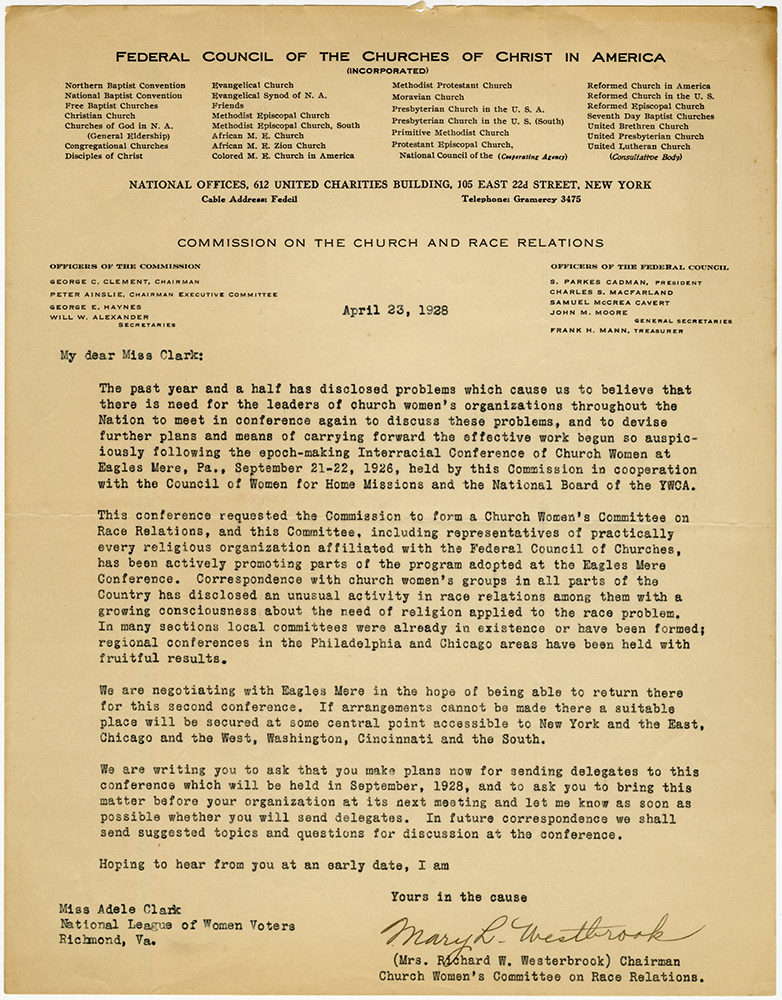 Letter from Mary L. Westbrook (Mrs. Richard W. Westbrook), Chairman, Church Women's Committee on Race Relations, Federal Council of the Churches of Christ in America, Inc. (Federal Council of Churches), sent to Adele Goodman Clark in her capacity as a representative of the National League of Women Voters at the 1926 Interracial Conference of Church Women.

The letter describes a second conference planned for September 1928, and requests Clark begin planning to send delegates from the NLWV.

"The past year and a half has disclosed problems which cause us to believe that there is need for the leaders of church women's organizations throughout the Nation to meet in conference again to discuss these problems, and to devise further plans and means of carrying forward the effective work begun so auspiciously following the epoch-making Interracial Conference of Church Women at Eagles Mere, Pa., Spetember 21-22, 1926, held by this Commission in cooperatin with the Council of Women for Home Missions and the National Board of the YWCA.

This conference requested the Commission to form a Church Women's Committee on Race Relations, and this Committee, including representatives of practically every religious organization affiliated with the Federal Council of Churches, has been actively promoting parts of the program adopted at the Eagles Mere Conference. Correspondence with church women's groups in all parts of the Country has disclosed an unusual activity in race relations among them with a growing consciousness about the need of religion applied to the race problem. In many sections local committees were already in existence or have been formed; regional conferences in the Philadelphia and Chicago areas have been held with fruitful results."

See all documents related to the Interracial Conference of Church Women.