Care for Her Through the YWCA: For Every Fighter a Woman Worker 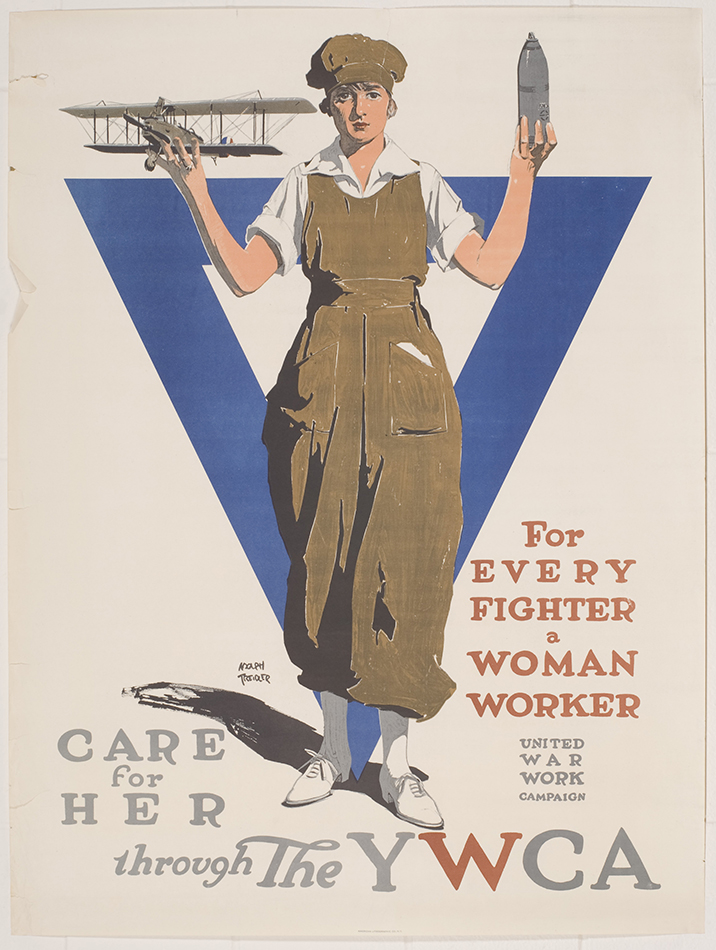 Care for Her Through the YWCA: For Every Fighter a Woman Worker

World War I poster created by Adolph Treidler to publicize the YWCA's participation in the United War Work Campaign, November 11 - 18, 1918.

The United War Work Campaign was a a one-week fundraising effort during World War I. Seven voluntary organizations -- the National War Work Council of the YMCA, the War Work Council of the YWCA, the National Catholic War Council (Knights of Columbus), the Jewish Welfare Board, the War Camp Community Service, the American Library Association, and the Salvation Army sought to raise $170,500,000 in subscriptions and pledges during the week of November 11–18, 1918, to help boost American soldiers’ morale and provide them with recreational activities.

A young woman wearing working clothes stands before a blue triangle symbolizing the YWCA. She holds an airplane in her right hand and a bomb in her left. Text reads:
"Care for her through the YWCA. For every fighter a woman worker. United War Work Campaign."

NO COPYRIGHT - NON-COMMERCIAL USE ONLY
This Work has been digitized in a public-private partnership. As part of this partnership, the partners have agreed to limit commercial uses of this digital representation of the Work by third parties. You can, without permission, copy, modify, distribute, display, or perform the Item, for non-commercial uses. For any other permissible uses, please review the terms and conditions of the organization that has made the Item available.
http://rightsstatements.org/vocab/NoC-NC/1.0/

Treidler, Adolph, “Care for Her Through the YWCA: For Every Fighter a Woman Worker,” Social Welfare History Image Portal, accessed February 9, 2023, https://images.socialwelfare.library.vcu.edu/items/show/406.