Society for the Entertainment of Shut-ins, 1909 [annual report] 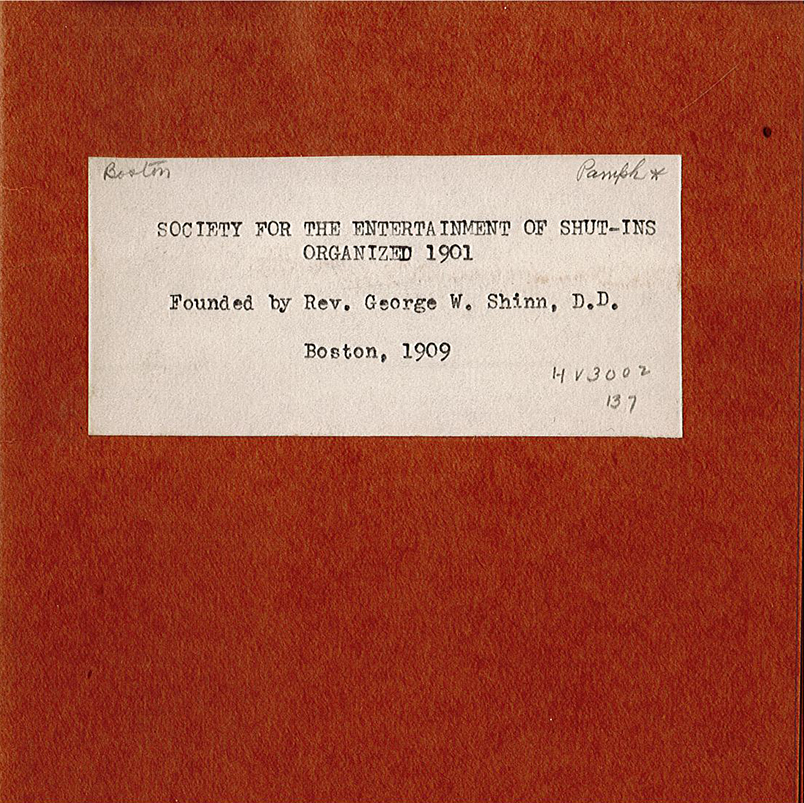 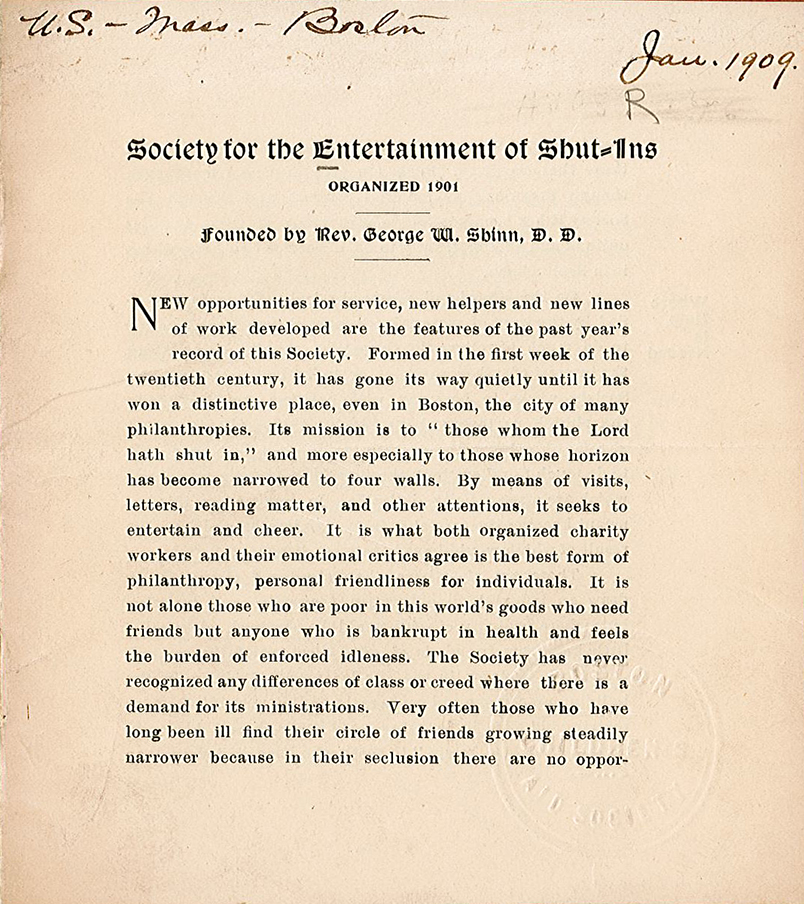 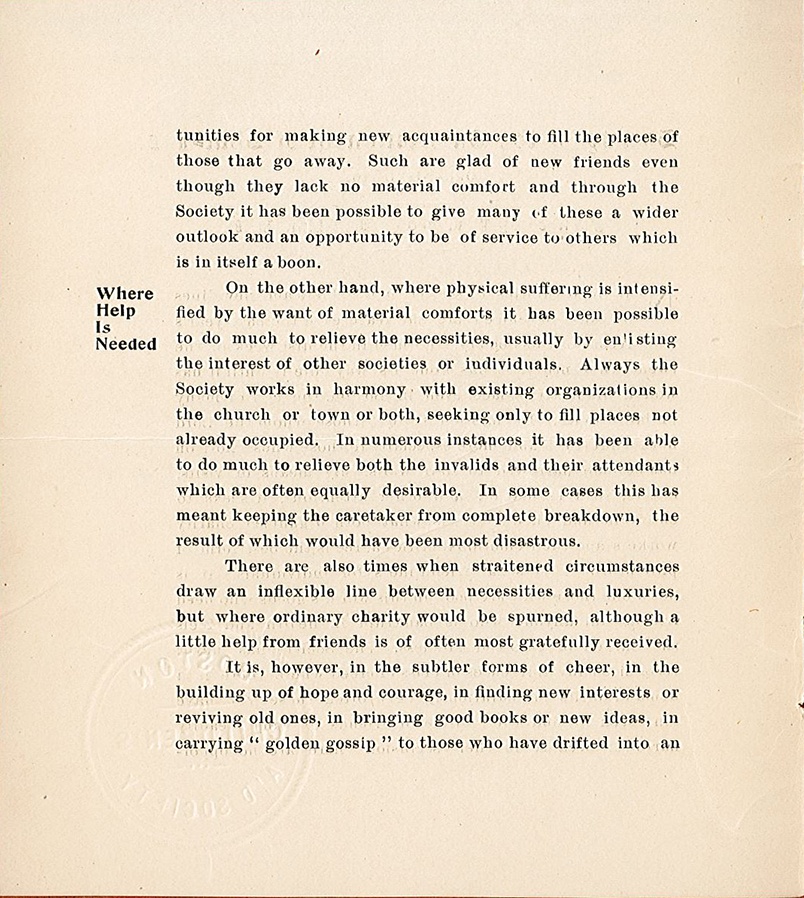 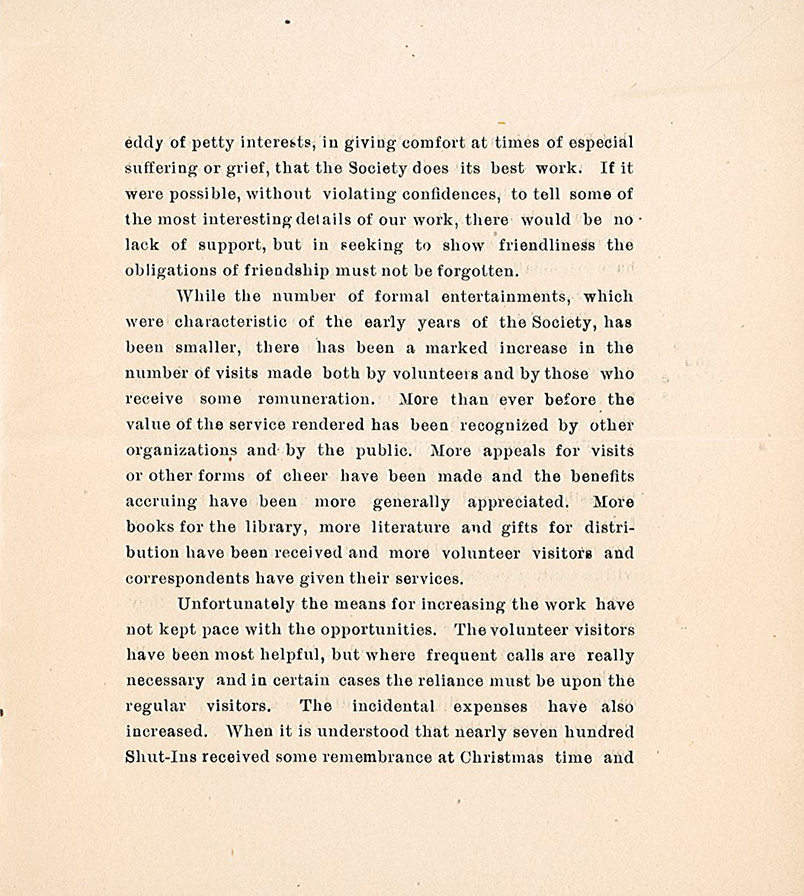 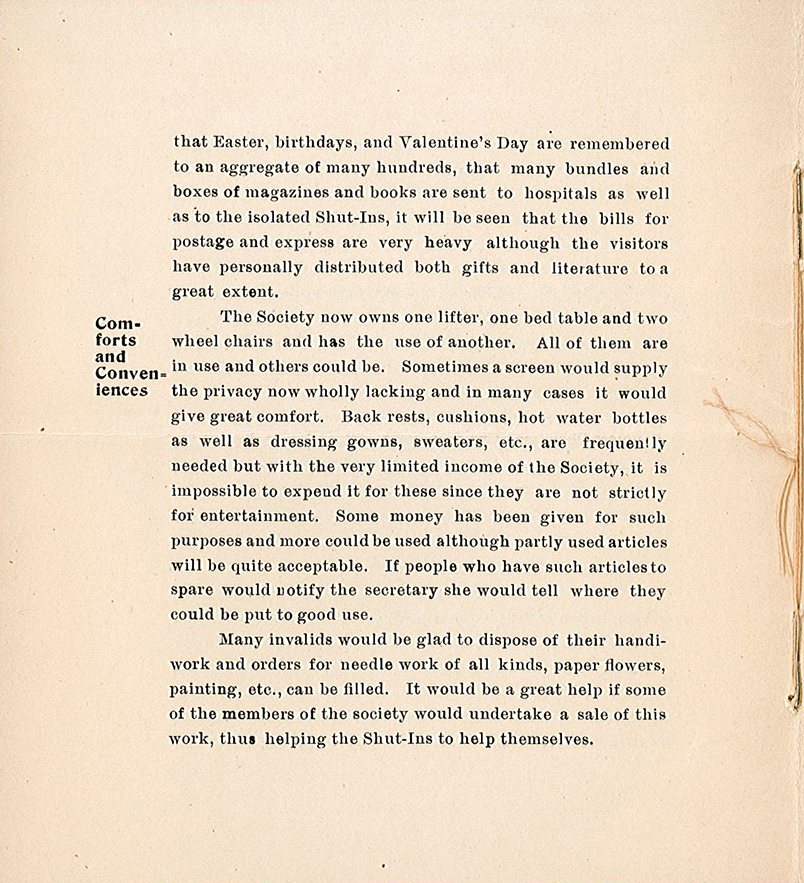 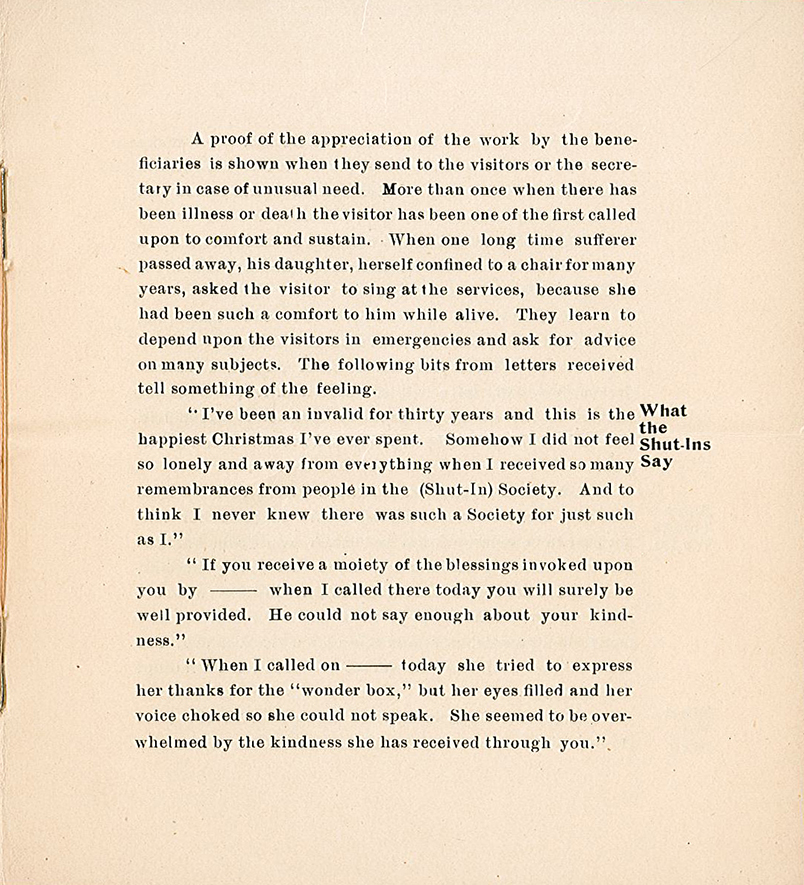 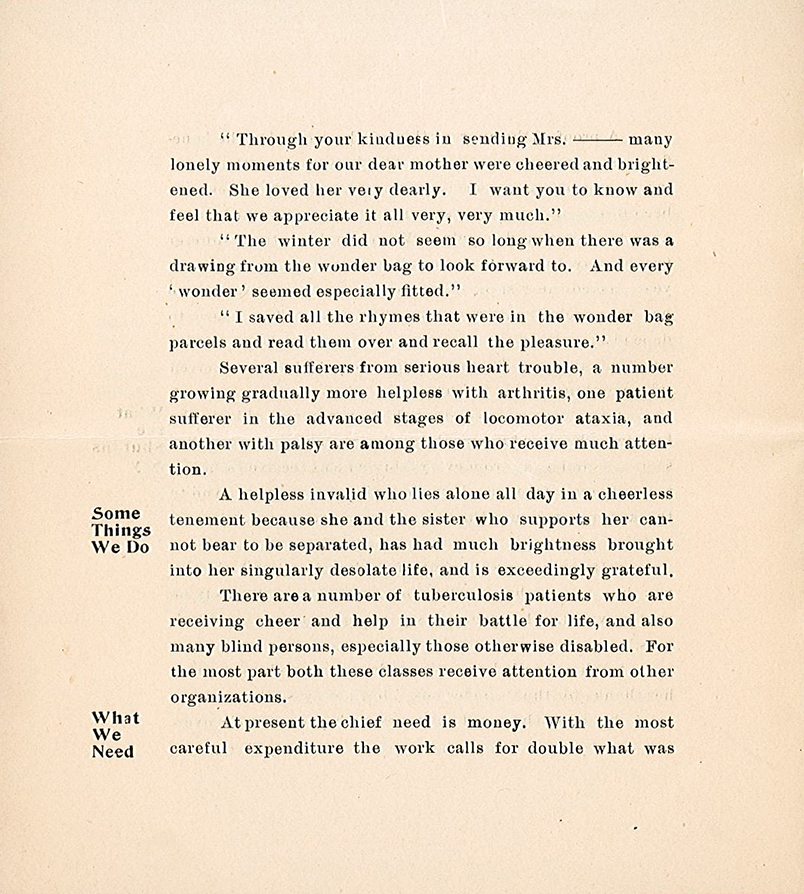 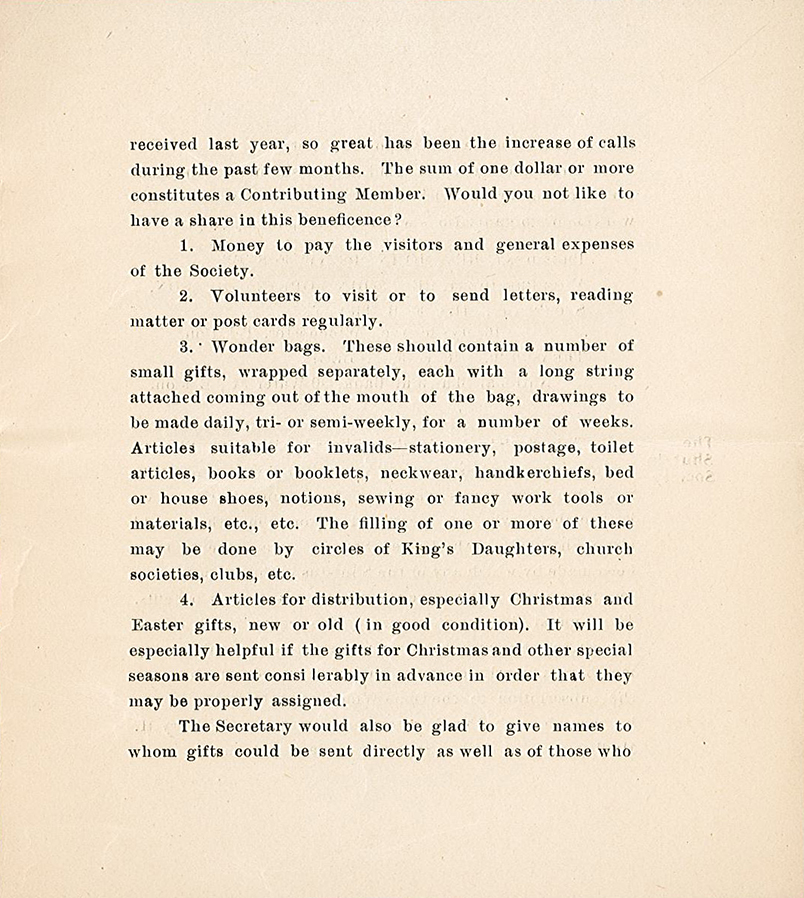 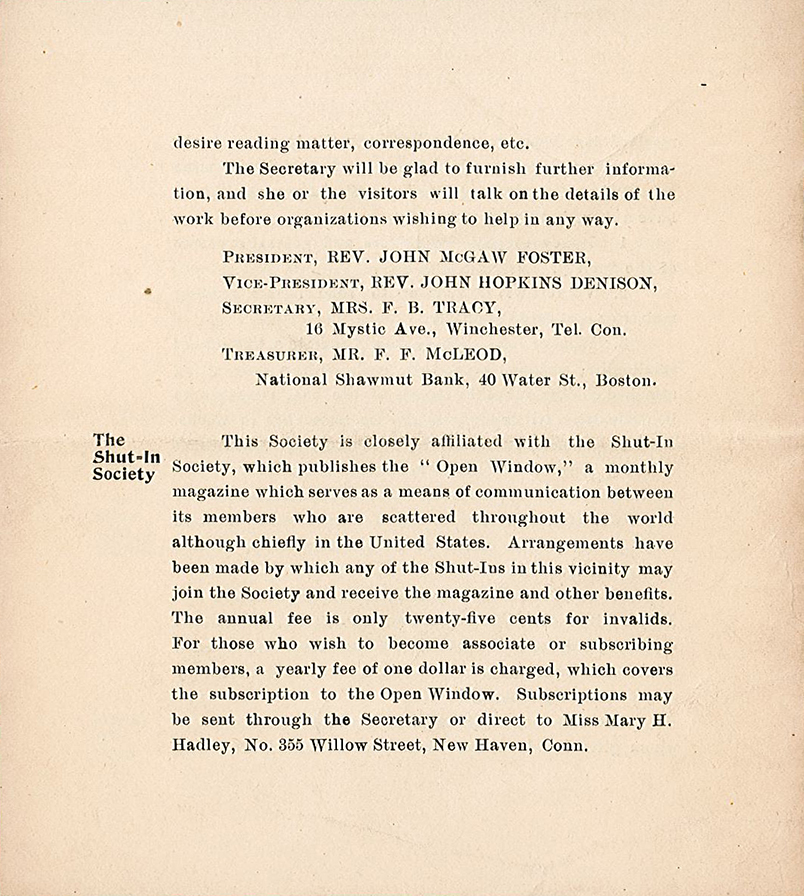 Society for the Entertainment of Shut-ins, 1909 [annual report]

The Society for the Entertainment of Shut-Ins (SESI) was founded in 1901 by the Rev. George W. Shinn, D. D. in Boston, Massachusetts. Shinn was the rector of Grace Episcopal Church, Newton, Ma.

According to these documents, the Society aimed “to relive the monotony and pain of a shut-in life…Its original plan included giving entertainments in hospitals and other institutions…the present work is chiefly among isolated invalids, and almost entirely with chronic sufferers, 'whom the Lord has shut in.'”

p. 2-3 "It is, however, in the subtler forms of cheer, in the building up of hope and courage, infinding new interests or reviving old ones, in bringing good books or new ideas, in carrying 'golden gossip' to those who have drifted into an eddy of petty interests, in giving comfort at times of especial suffering or grief, that the Society does its best work."

p. 6 "A helpless invalid who lies alone all day in a cheerless tenement because she and the sister who supports her cannot bear to be separated, has had much brightness brought into her sinularly desolate life, and is exceedingly grateful."

p. 8 "This Society is closely affiliated with the Shut-In Society, which publishes the 'Open Window,' a monthly magazine which serves as a means of communication between its members who are scattered throughout the world although chiefly in the United States."

No Copyright – Non-Commercial Use Only
This object has been digitized in a public-private partnership. As part of this partnership, the partners have agreed to limit commercial uses of this digital representation of the object by third parties. You can, without permission, copy, modify, distribute, display, or perform the digital object, for non-commercial uses. For any other permissible uses, please review the terms and conditions of the organization that has made the item available.
http://rightsstatements.org/vocab/NoC-NC/1.0/