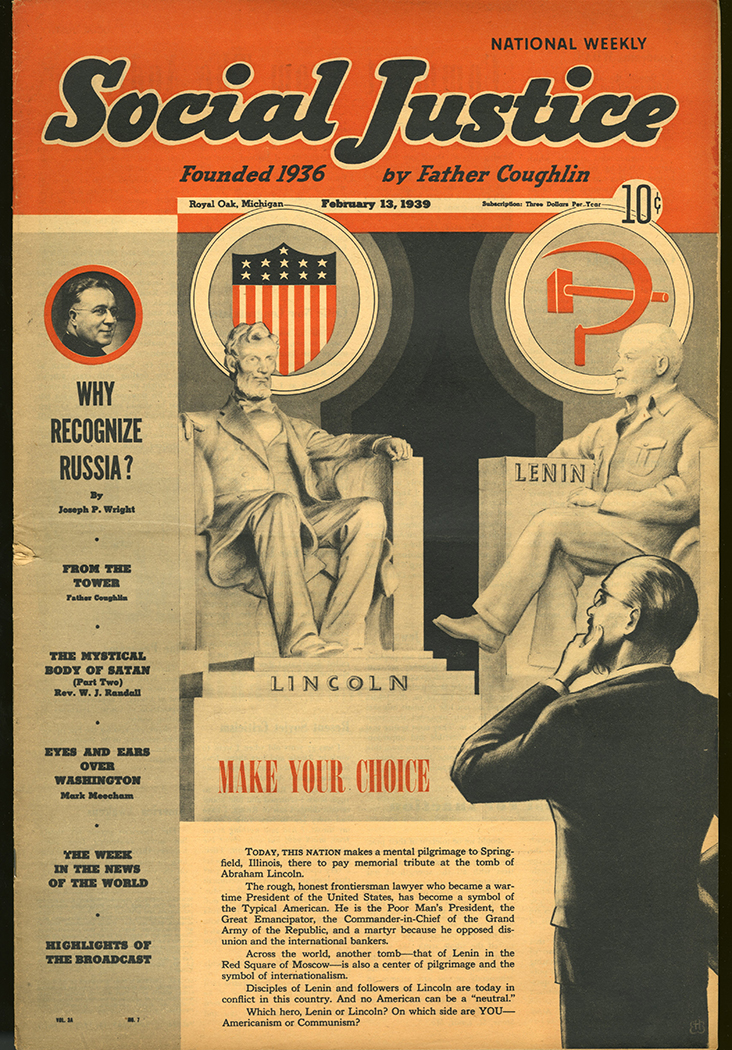 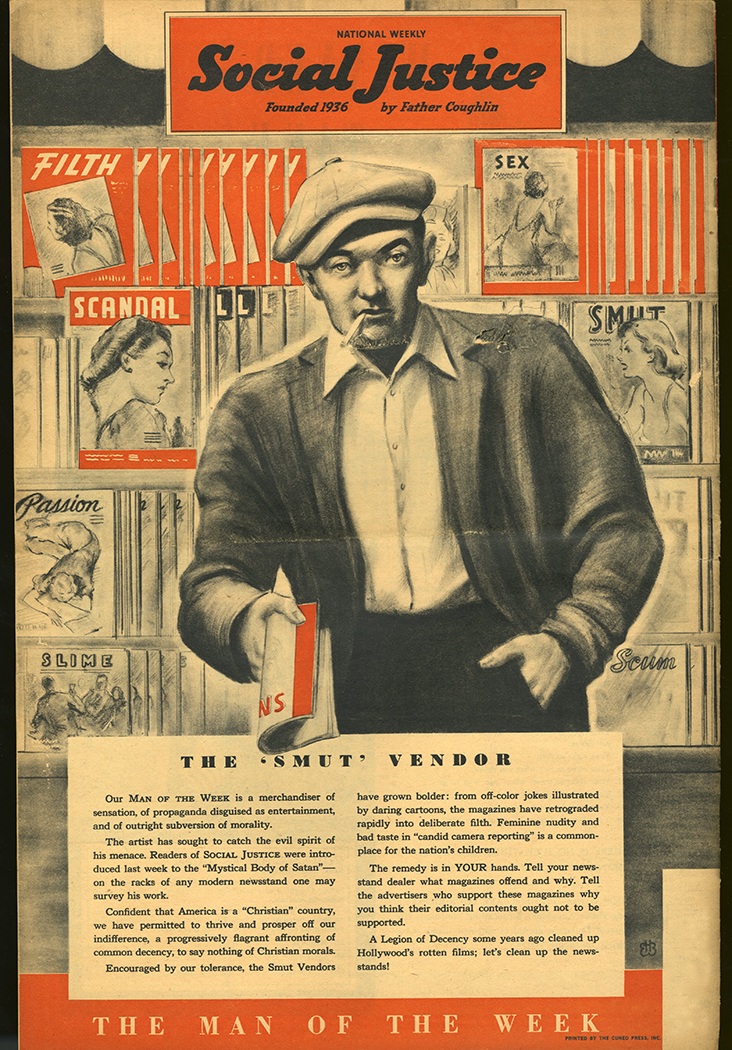 Social Justice was a national weekly periodical published by Father Charles Coughlin during the late 1930s and early 1940s. Couglin was a Canadian-American Roman Catholic priest based near Detroit, Michigan. Coughlin hosted a weekly radio show that reached an estimated 30 million listeners.

Social Justice was controversial for publishing anti-Semitic polemics. Eventually, the periodical's mailing permit was revoked and Father Coughlin's radio show was forced off the air.

Front cover: "Make Your Choices"
[Image Description: A man stands stroking his beard as he contemplates two statues, one of Abraham Lincoln and the other of  Lenin.]

"Today, this nation makes a mental pilgrimage to Springfield, Illinois, there to pay memorial tribute at the tomb of Abraham Lincoln.
The rough, honest frontiersman lawyer who became a wartime President of the United States, has become a symbol of the Typical American. He is the Poor Man's President, the Great Emancipator, the Commander-in-Chief of the Grand Army of the Republic, and a martyr because he opposed dis-union and the international bankers.

Across the world, another tomb--that of Lenin in the Red Square of Moscow--is also a center of pilgrimage and the symbol of internationalism.

Disciples of Lenin and followers of Lincoln are today in conflice in this country. And no American can be a 'neutral.'

Which hero, Lenin or Lincoln? On which side are YOU--Americanism or Communism?"

Back cover: "The 'Smut' Vendor"
[Image Description: A man stands before a newsstand, smoking a cigarette and holding out a salacious magazine to the viewer. Behind him the shelves are filled with periodicals with titles such as "Smut," "Scandal," "Slime," "Passion," and "Scum."]

"Our Man of the Week is a merchandiser of sensation, of propaganda disguised as entertainment, and of outright subversion of morality.

The artist has sought to catch the evil spirit of his menace. Readers of Social Justice were introduced last week to the 'Mystical Body of Satan'--on the racks of any modern newstand on may survey his work.

Confident that America is a 'Christian' country, we have permitted to thrive and prosper off our indifference, a progressively flagrant affronting of common decency, to say nothing of Christian morals.

Encouraged by our tolerance, the Smut Vendors have grown bolder: from off-color joke illustrated by daring cartoons, the magazines have retrograded rapidly into deliberate filth. Feminine nudity and bad taste in 'candid camera reporting' is a commonplace for the nation's children.

The remedy is in YOUR hands. Tell your newsstand dealer what magazines offend and why. Tell the advertisers who support these magazines why you think their editorial contents ought not to be supported.

A Legion of Decency some years ago cleaned up Hollywood's rotten films; let's clean up the newsstands!"

Annotate the item description on this page, or a PDF of this material with hypothes.is
Social Welfare History Image Portal