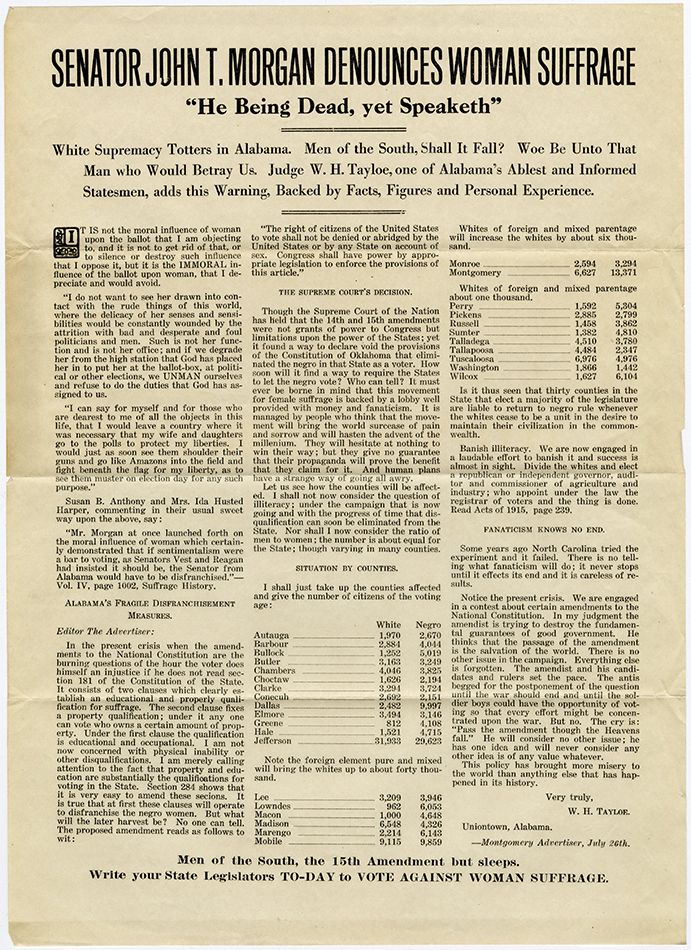 Anti-suffrage broadside that argues voting will corrupt women, and, more urgently, that increasing the number of black votes will bring about the end of white supremacy in Alabama. The words of Senator John Tyler Morgan, a staunch proponent of white supremacist ideology, and Judge William Henry Tayloe, a wealthy plantation owner, are quoted. Susan B. Anthony and Ida Husted Harper are mentioned.

"White Supremacy Totters in Alabama. Men of the South, Shall It Fall? Woe Be Unto That Man who Would Betray Us. Judge W. H. Tayloe, one of Alabama's Ablest and Informed Statesmen, adds this Warning, Backed by Facts, Figures and Personal Experience."

"It is not the moral influence of woman upon the ballot that I am objecting to, and it is not to get rid of that, or to silence or destroy such influence that I oppose it, but it is the IMMORAL influence of the ballot upon woman, that I depreciate and would avoid.
I do not want to see her drawn into contact with the rude things of this world, where the delicacy of her senses and sensibilities would be constantly wounded by the attrition with bad and desperate and foul politicians and men. Such is not her function and is not her office; and if we degrade her from the high station that God has place her in to put her at the ballot-box, at political or other elections, we UNMAN ourselves and refuse to do the duties that God as assigned to us."

"Though the Supreme Court of the Nation has held that the 14th and 15th amendments were not grants of power to Congress but limitations upon the power of the States; yet it found a way to declare void the provisions of the Constitution of Oklahoma that eliminated the negro in that State as a voter. How soon will it find a way to require the States to let the negro vote? Who can tell?"

"Men of the South, the 15th Amendment but sleeps. Write your State Legislators TO-DAY to VOTE AGAINST WOMAN SUFFRAGE."