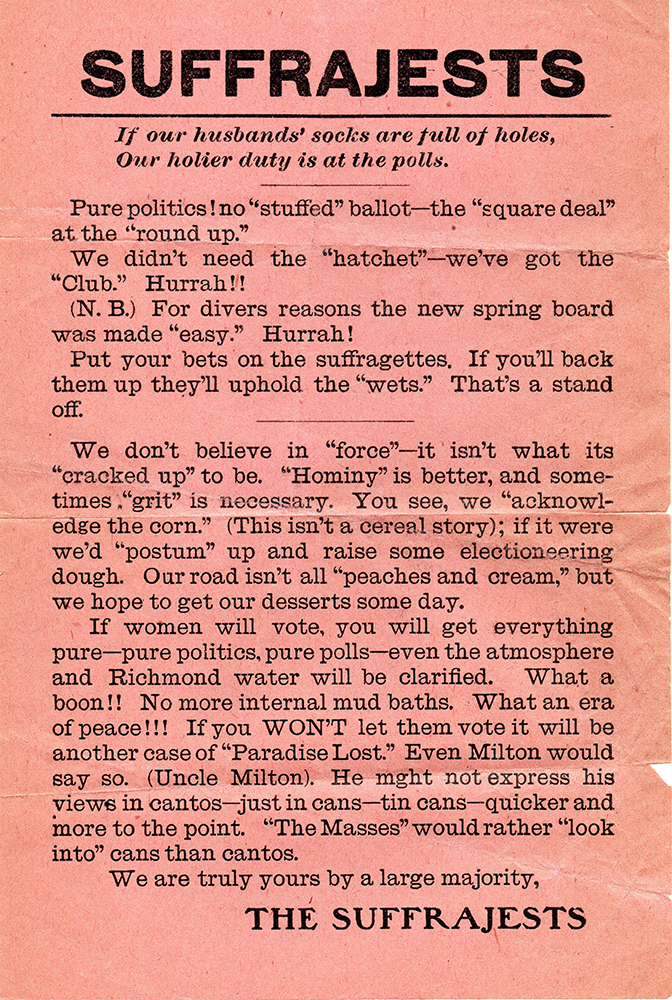 Anti-suffrage broadside poking fun at the woman suffrage movement. Filled with puns and inside jokes, the source and precise meaning of this publication are uncertain.

The "hatchet" refers to Carrie Nation, the radical temperance activist. The "wets" (and "drys") were the two sides on the issue of prohibition.

Some of the puns refer to foods made from corn: grits and hominy. Postum is a coffee substitute made from roasted wheat and molasses.

Paradise Lost is an epic poem written by John Milton. The poem is divided into twelve sections known as "books." A "canto" is another word for the sections into which some long poems are divided. The History of Woman Suffrage quotes a line from Paradise Lost, "All is not lost: the unconquerable will is ours."

The Masses was a richly illustrated socialist magazine, published monthly from 1911 until 1917.

Excerpts:
SUFFRAJESTS
If our husbands' socks are full of holes,
Our holier duty is at the polls....

Put your bets on the suffragettes. If you'll back them up they'll uphold the "wets." That's a stand off.

We don't believe in "force"--it isn't what its "cracked up" to be. "Hominy" is better, and somes "grit" is necessary. You see, we "acknowledge the corn." (This isn't a cereal story.); if it were we'd "postum" up and raise some electioneering dough. Our road isn't all "peaches and cream," but we hope to get our desserts some day....

We are truly yours by a large majority,
THE SUFFRAJESTS