Constitutionality of the Voting Rights Act of 1965; a response to the Attorney General of the United States... 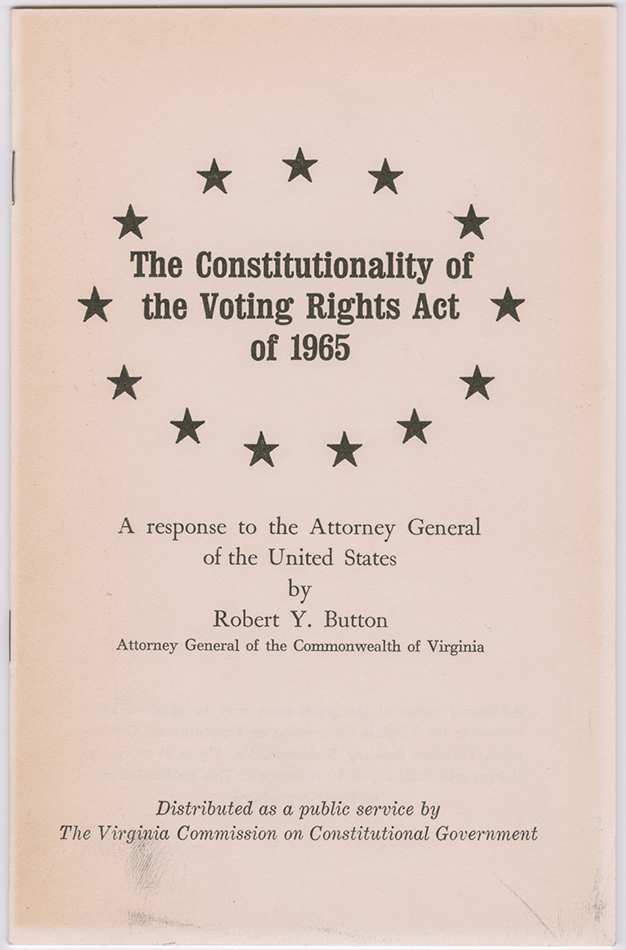 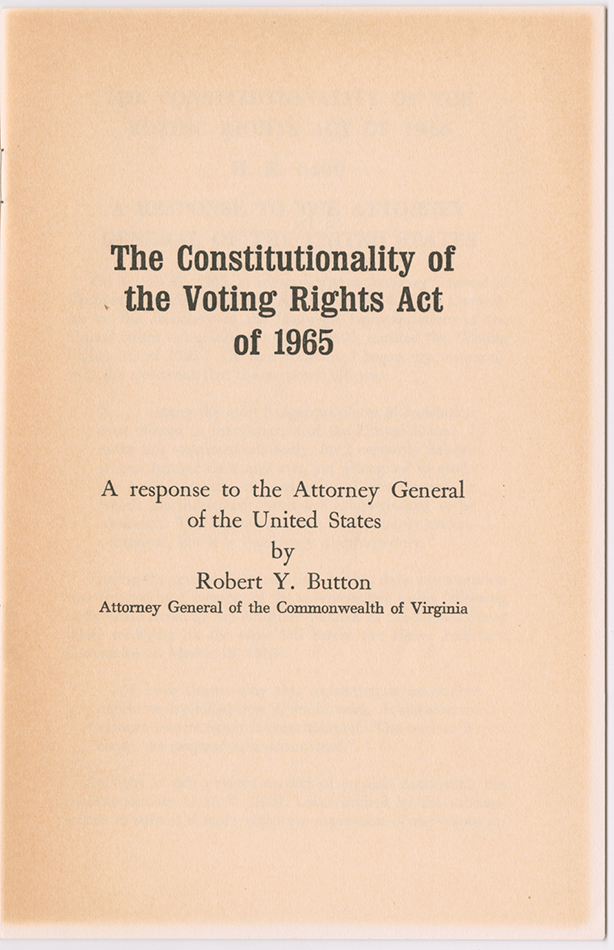 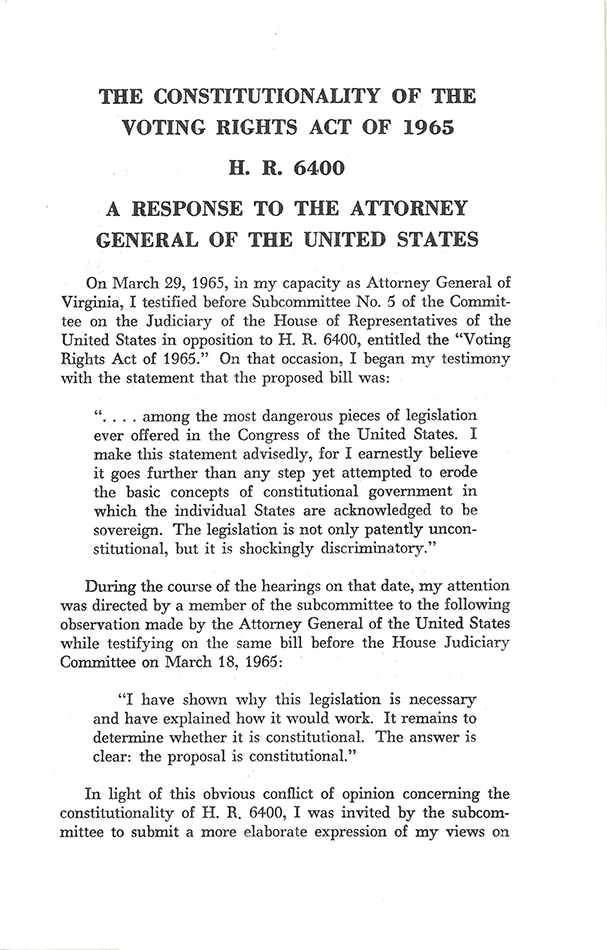 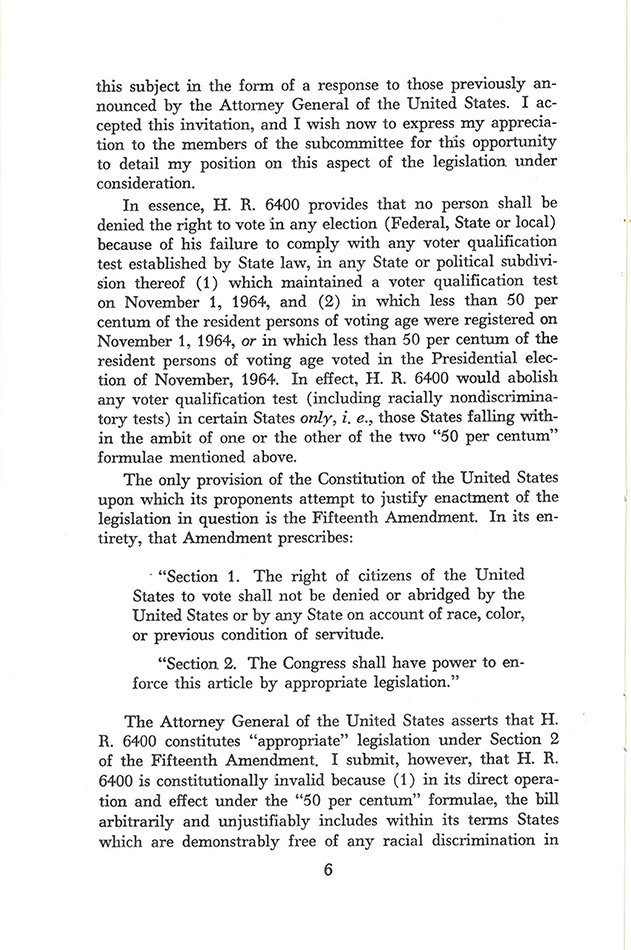 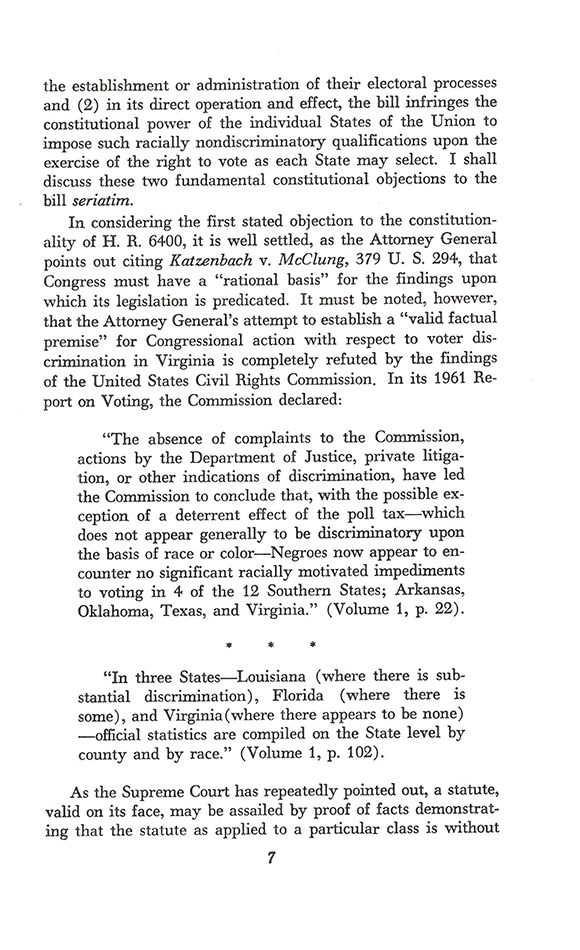 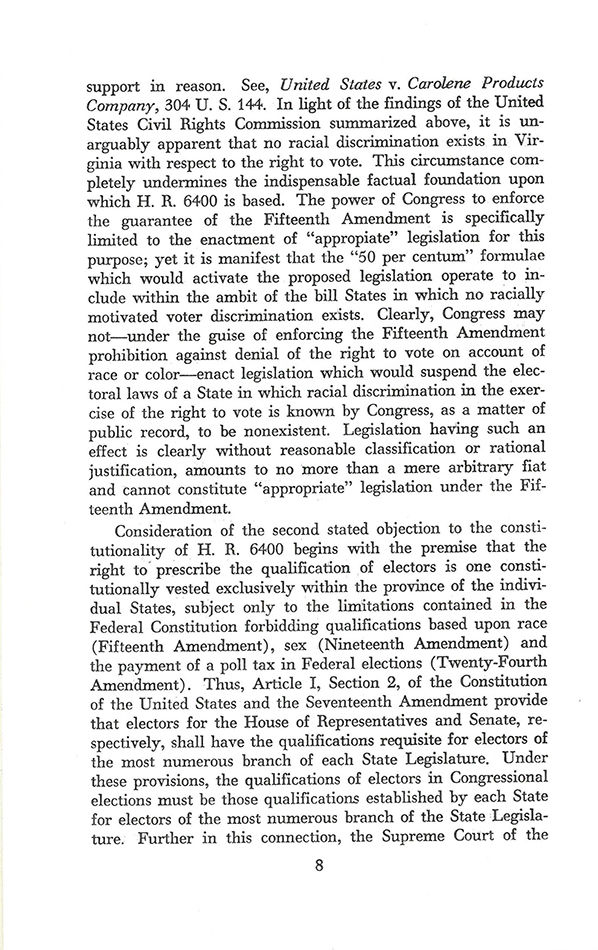 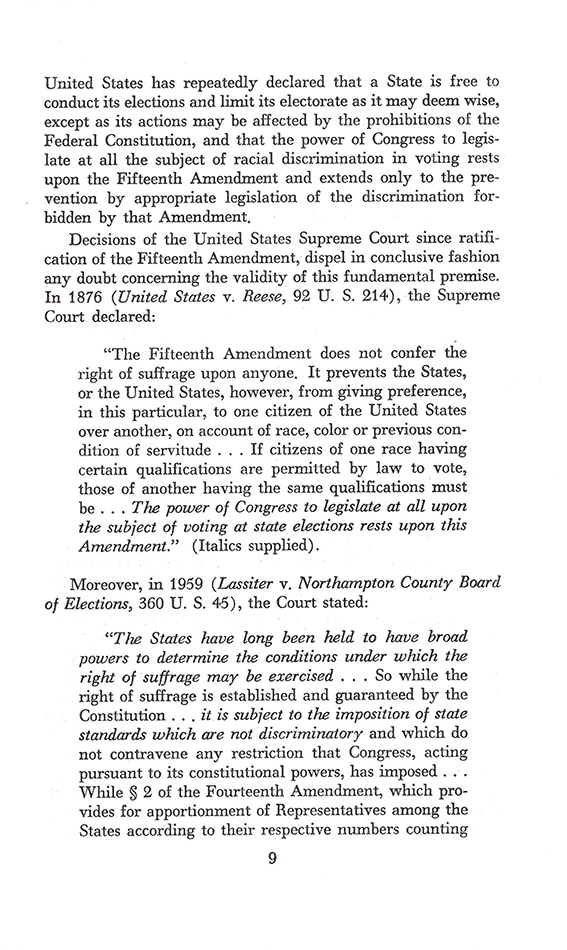 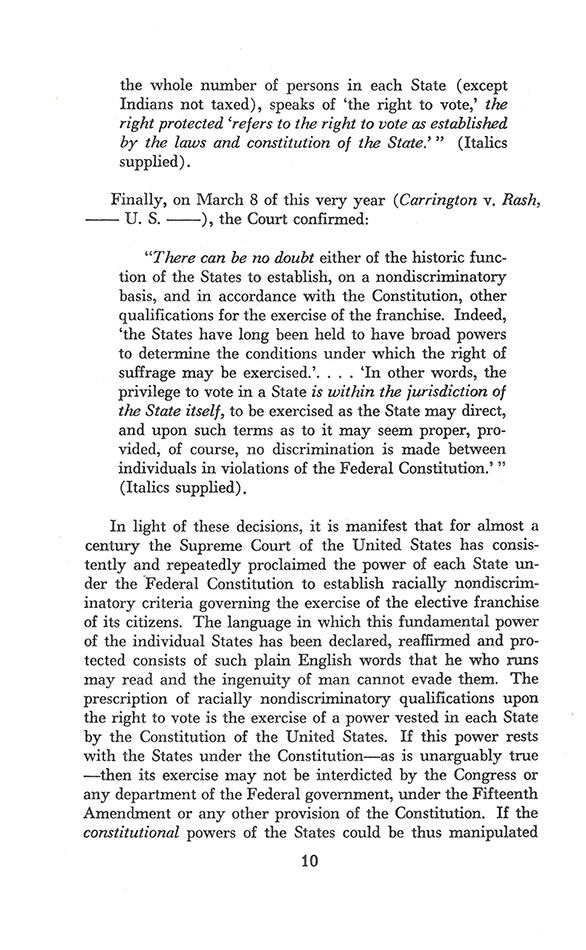 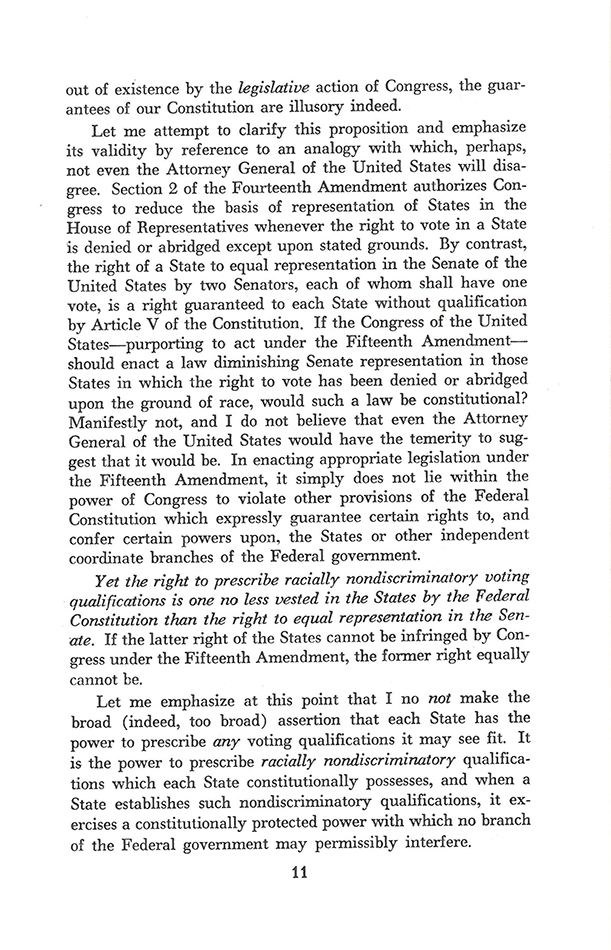 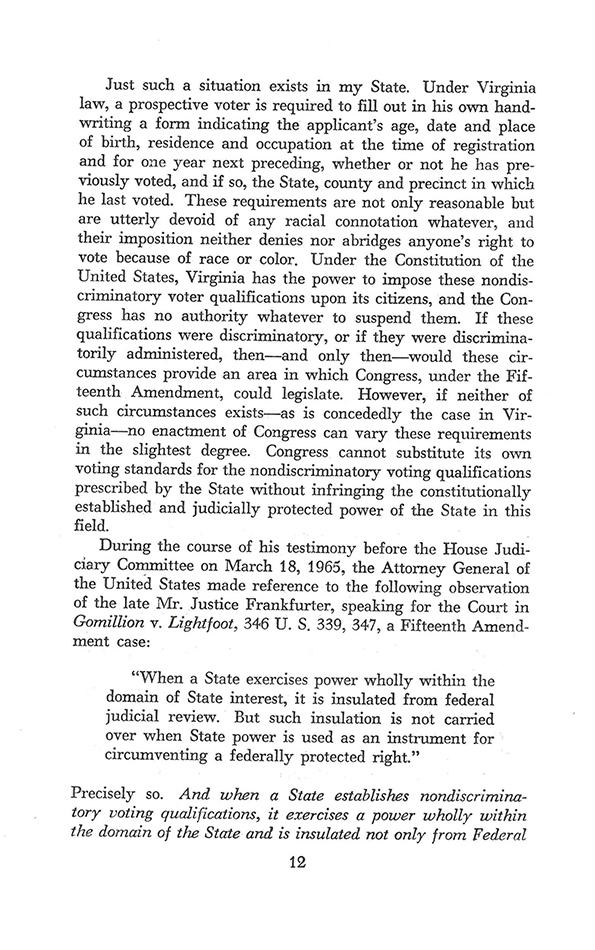 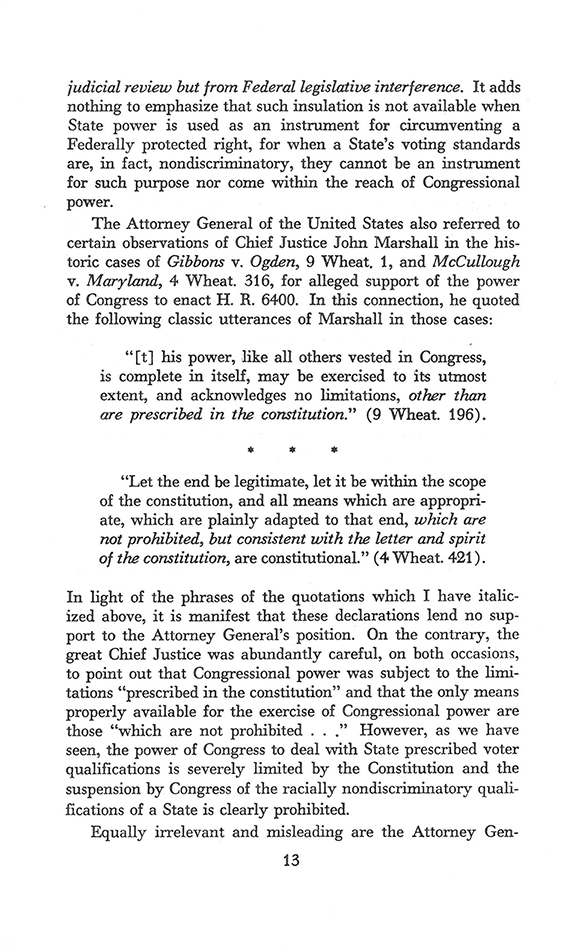 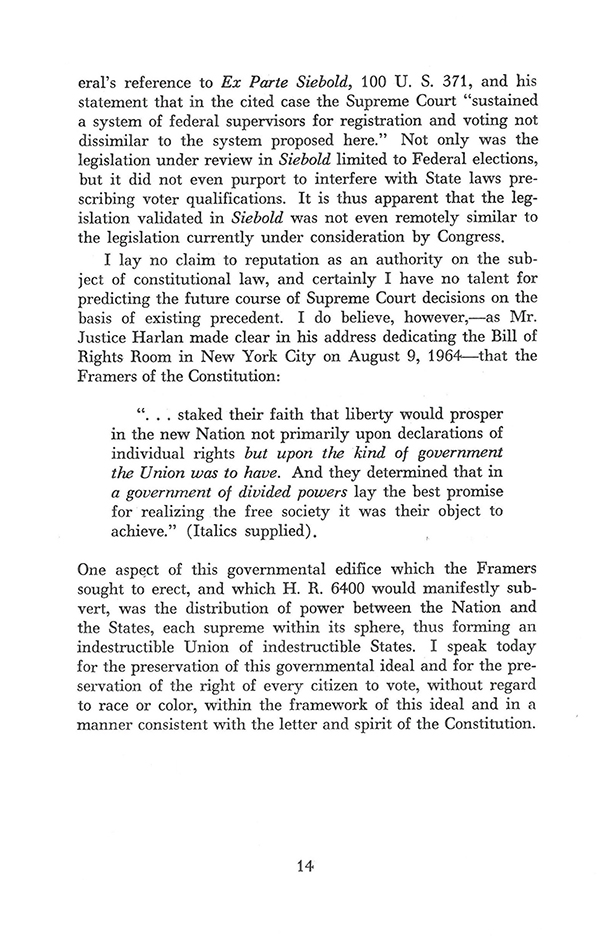 Constitutionality of the Voting Rights Act of 1965; a response to the Attorney General of the United States...

This booklet was distributed by the Virginia Commission on Constitutional Government (VCCG) in opposition to the Voting Rights Act of 1965. The Commission began in 1958 and existed until the late 1960s.

Led by David J. Mays, a prominent lawyer and advisor to Virginia’s commission on the response to the Brown v. Board of Education decision, it advocated nationally for states’ rights and conservatism, and eventually distributed over 2 million published pamphlets, brochures and speeches. The Constitutionality of the Voting Rights Act of 1965 argues against the Voting Rights Act. Robert Y. Button (Virginia’s Attorney General at the time) made a typical VCCG argument in stating that the Act “attempted to erode the basic concepts of constitutional government in which the individual States are acknowledged to be sovereign” and is “patently unconstitutional.”

pp. 8-9 "the Supreme Court of the United States has repeatedly declared that a State is free to conduct its elections and limit its electorate as it may deem wise, except as its actions may be affected by the prohibitions of the Federal Constitution, and that the power of Congress to legistlate at all the subject of racial discrimination in voting rests upon the Fifteenth Amendment and extends only to the prevention by appropriate legistlation of the discriminatiion forbidden by that Amendment..."

p. 14 "I do believe, however, -- as Mr. Justice Harlan made clear...that the Framers of the Constitution:

'staked their faith that liberty would proper in the new Nation not primarily upon declarations of individual rights but upon the kind of government the Union was to have. And they determined that in a government of divided powers lay the best promise for realizing the free society it was their object to achieve.' (Italics supplied [by Button].

One aspect of this governmental edifice which the Framers sought to erect, and which H. R. 6400 would manifestly subvert, was the distribution of power between the Nation and the States, each supreme within its sphere, thus forming an indestructible Union of indestructible States."

Other VCCG publications in the Image Portal