SCLC Crusade for the Vote: To Double the Negro Vote in the South [Southern Christian Leadership Conference brochure] 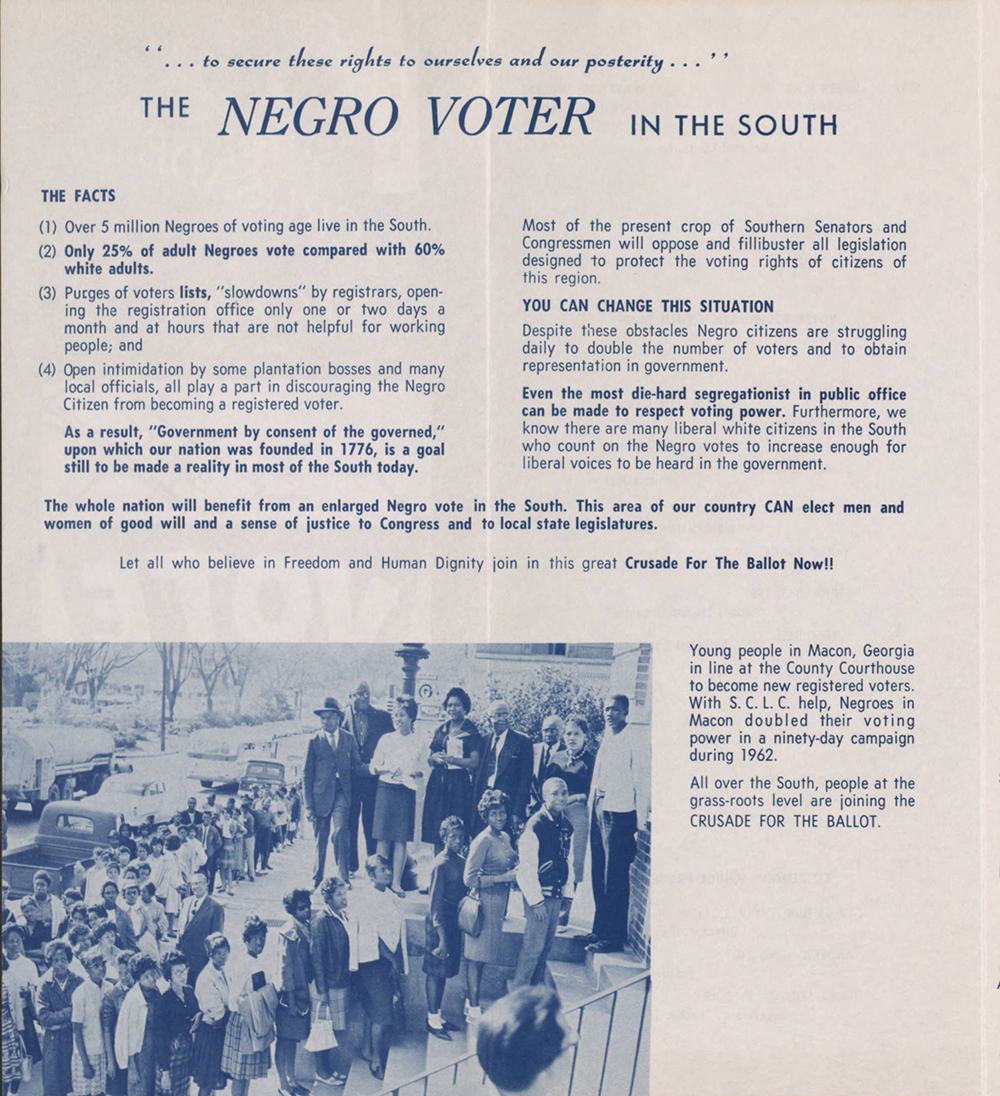 SCLC Crusade for the Vote: To Double the Negro Vote in the South [Southern Christian Leadership Conference brochure]

Brochure distributed by the Southern Christian Leadership Conference (SCLC) which describes and promotes the "Crusade for the Ballot. To Double the Negro Vote in the South." The campaign aimed to double the number of registered Black voters in the South and to educate and stimulate these citizens to exercise the vote.

Page 3 of the brochure states that this goal will be achieved by educating and stimulating Black citizens to vote. Organizing communities, bipartisanship, and non-violence.

The pamphlet is from the National Conference of Christians and Jews, Religious Freedom and Public Affairs Project, and is part of a resource file on discrimination in voting. It discusses voter suppression tactics and lists ways to counter them and increase voter registration and participation.

p. 2
THE FACTS
(1) Over 5 million Negros of voting age live in the South.
(2) Only 25% of adult Negroes vote compared with 60% white adults.
(3) Purges of voter lists, "slowdowns" by registrars, opening the registration office only one of two days a month and at hours that are not helpful for working people; and
(4) Open intimidation by some plantation bosses and many local officials, all play a part in discouraging the Negro Citizen from becoming a registered voter.

As a result, "Government by consent of the governed," upon which our nation was founded in 1776, is a goal still to be made a reality in most of the South today.

Most of the present crop of Southern Senators and Congressmen will oppose and fillibuster all legislation designed to protect the voting rights of citizens of this region.

YOU CAN CHANGE THIS SITUATION
Despite these obstacles Negro citizens are struggling daily to double the number of voters and to obtain representation in government.
Even the most die-hard segregationist in public office can be made to respect voting power. Furthermore, we know there are many liberal white citizens in the South who count on the Negro votes to increase enough for liberal voice to be heard in the government.
The whole nation will benefit from an enlarged Negro vote in the South. This area of our country CAN elect men and women of good will and a sense of justice to Congress and to local state legislatures.
Let all who believe in Freedom and Human Dignity join in this great Crusade for The Ballot Now!!

p. 3 In Unity There Is Strength. No narrow partisan interest must be allowed to divide us. In reaching a cross section of the Negro community, the Crusade will move across party lines. It is for the good of the local community that all civic, church, fraternal and other organizations

p. 4
"The goal of the Freedom Movement in the South can be summed up in 3 words: All, Here, and Now
We want all of our rights as citizens (not just some rights);
We want them here, in the Deep South, and
We want them now"
-Martin Luther King, Jr.

When you have finished reading this, please pass it on to a member of the family, a neighbor or a friend.