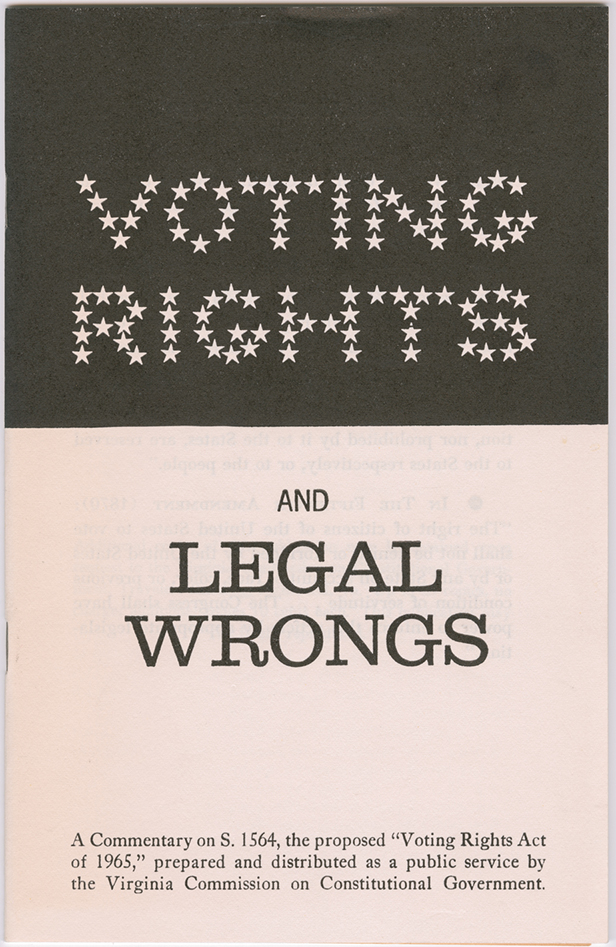 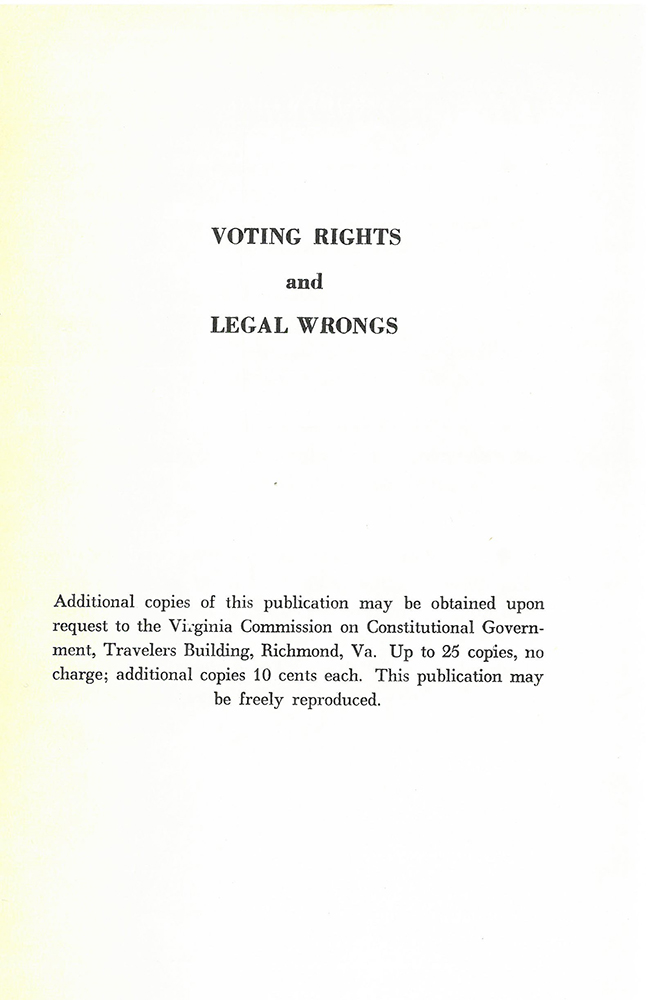 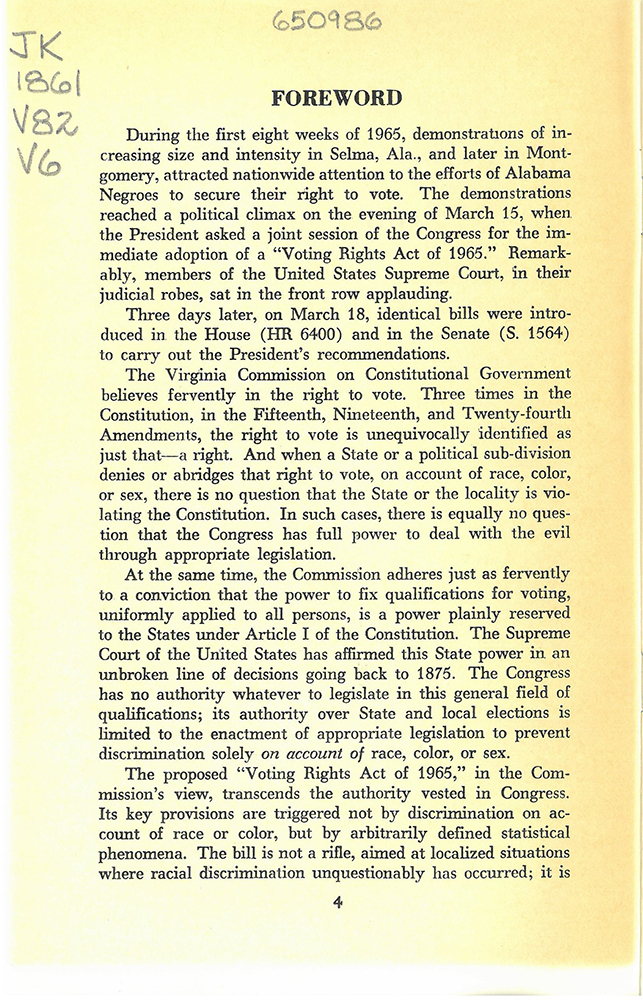 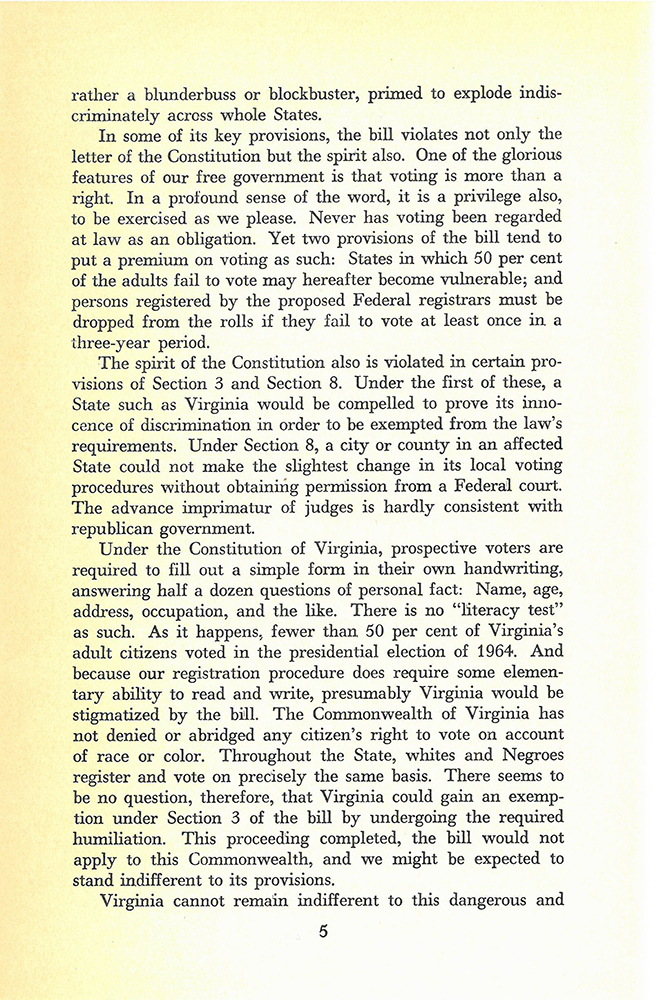 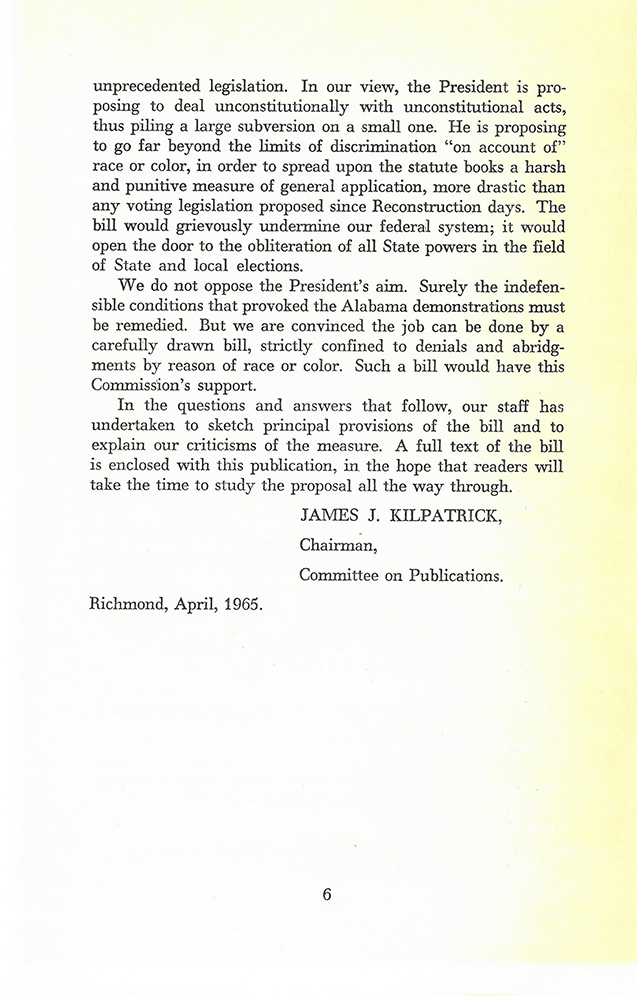 This booklet was distributed by the Virginia Commission on Constitutional Government (VCCG) in opposition to the Voting Rights Act of 1965. The Commission began in 1958 and existed until the late 1960s.

Led by David J. Mays, a prominent lawyer and advisor to Virginia’s commission on the response to the Brown v. Board of Education decision, it advocated nationally for states’ rights and conservatism, and eventually distributed over 2 million published pamphlets, brochures and speeches.

During the first eight weeks of 1965, demonstrations of increasing size and intensity in Selma, Ala., and later in Montgomery, attracted nationwide attention to the efforts of Alabama Negroes to secure their right to vote. The demonstrations reached a political climax on the evening of March 15, when the President asked a joint session of the Congress for the immediate adoption of a "Voting Rights Act of 1965." Remarkably, members of the United States Supreme Court, in their judical robes, sat in the front row applauding.

Three days later, on March 18, identical bills were introduced in the House (HR 6400) and in the Senate (S. 1564) to carry out the President's recommendations.

The Virginia Commission on Constitutional Government believes fervently in the right to vote....At the same time, the Commission adheres just as fervently to a conviction that the power to fix qualifications for voting, uniformly applied to all persons, is a power plainly reserved to the States under Article I of the Constitution....

The proposed "Voting Rights Act of 1965," in the Commission's view, transcends the authority vested in Congress. Its key provisions are triggered not by discrimination on account of race or color, but by arbitrarily defined statistical phenomena....

In our view, the President is proposing to deal unconstitutionally with unconstitutional acts, thus piling a large subversion on a small one. He is proposing to go far beyond the limits of discrimination "on account of" race or color, in order to spread upon the statute books a harsh and punitive measure of general application, more drastic than any voting legislation proposed since Reconstruction days. The bill would grievously undermine our federal system; it would open the door to the obliteration of all State powers in the field of State and local elections.

We do not oppose the President's aim. Surely the indefensible conditions that provoked the Alabama demonstrations must be remedied. But we are convinced the job can be done by a carefully drawn bill, strictly confined to denials and abridgments by reason of race or color. Such a bill would have this Commission's support...."


Other VCCG publications in the Image Portal