League for the Promotion of Public School Education in Virginia letter, January 20, 1930 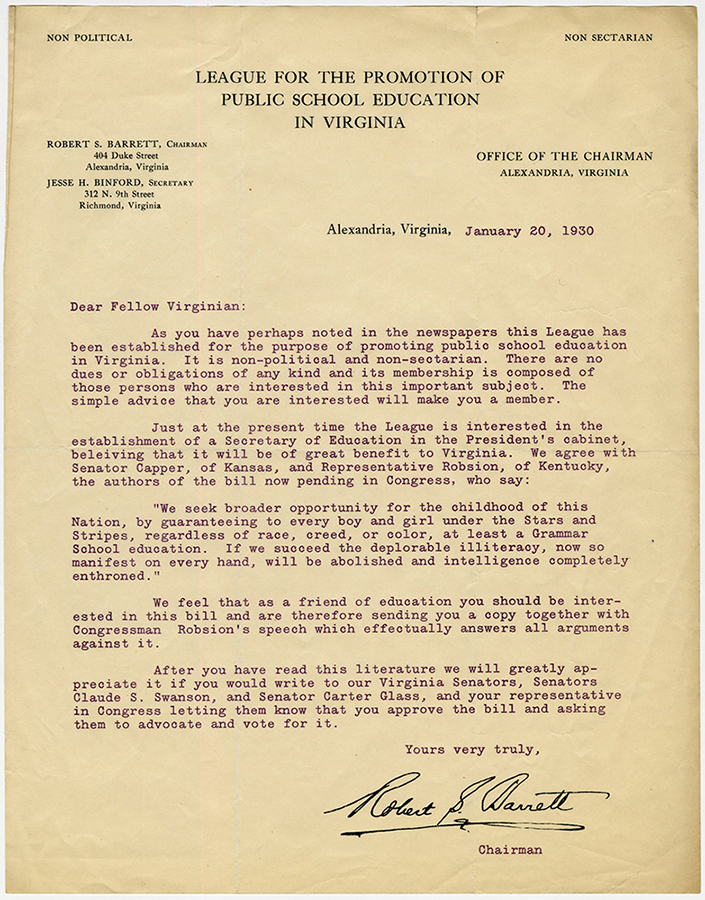 League for the Promotion of Public School Education in Virginia letter, January 20, 1930

Informational letter from the League for the Promotion of Public School Education in Virginia signed by the Chairman, Robert S. Barrett. Barrett was the son of the Rev. Dr. Robert S. Barrett, an Episcopal clergyman, and Kate Waller Barrett, one of the first women medical doctors in the South and co-founder of the National Florence Crittenton Mission.

As you have perhaps noted in the newspapers this League has been established for the purpose of promoting public school education in Virginia. It is non-political and non-sectarian. There are no dues or obligations of any kind and its membership is composed of those persons who are interested in this important subject. The simple advice that your are interested will make you a member.

Just at the present time the League is interested in the establishment of a Secretary of Education in the Presidents cabinet, believing that it will be of great benefit to Virginia. We agree with Senator Capper, of Kansas, and Representative Robsion, of Kentucky, the authors of the bill now pending in Congress, who say:

"We seek broader opportunity for the childhood of this Nation, by guaranteeing to every boy and girl under the Stars and Stripes, regardless of race, creed, or color, at least a Grammar School eduation. If we succeed the deplorable illiteracy, now so manifest on every hand, will be abolished and intelligence completely enthroned."

We feel that as a friend of education you should be interested in this bill and are therefore sending you a copy together with Congressman Robsion's speech which effectually answers all arguments against it.

After you have read this leterature we will greatly appreciate it if you would write to our Virginia Senators, Senators Claude S. Swanson, and Senator Carter Glass, and your representative in Congress letting them know that you approve the bill and asking them to advocate and vote for it.