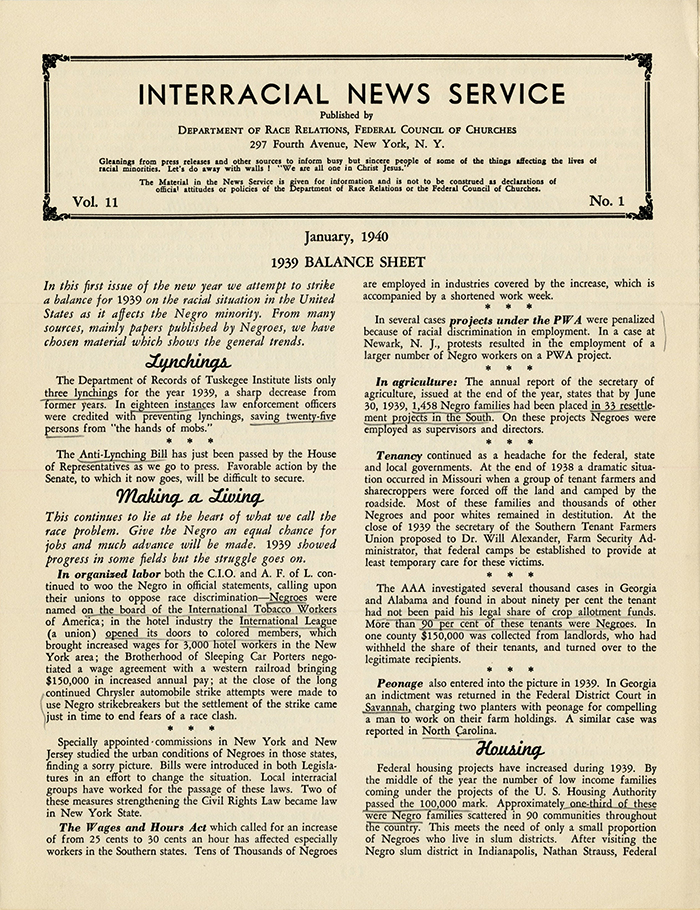 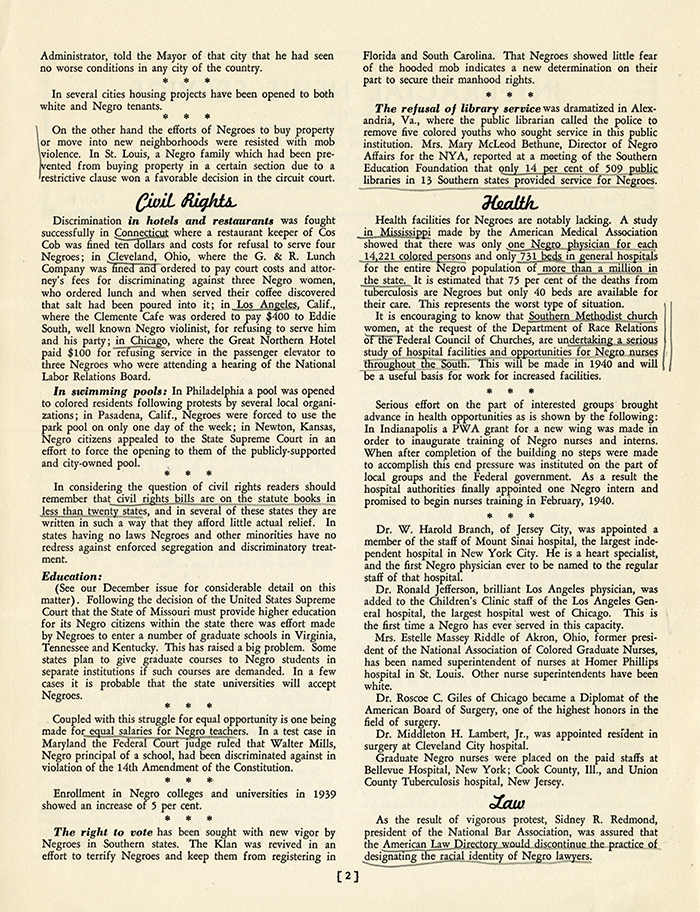 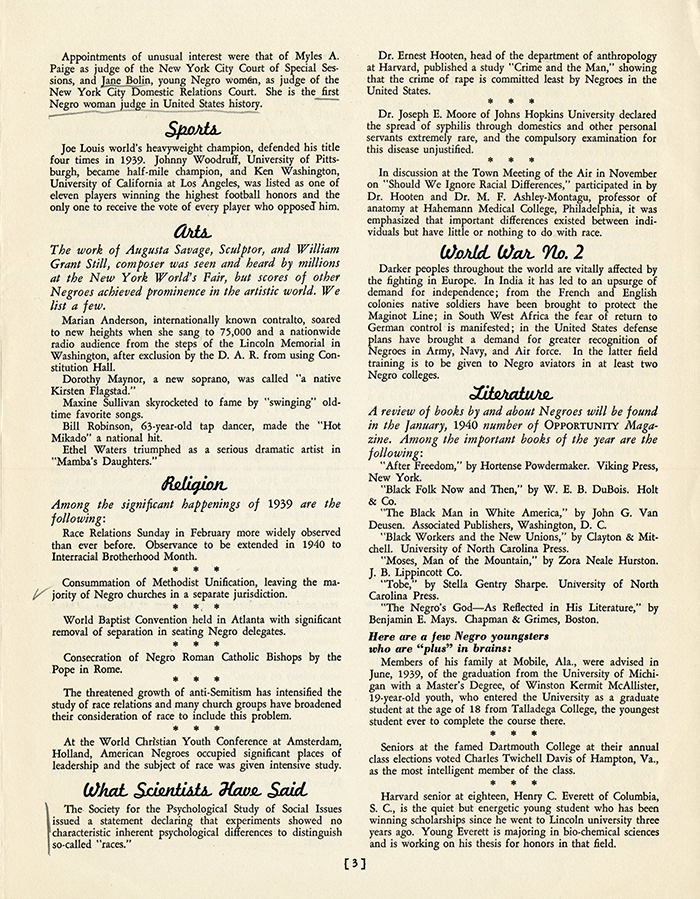 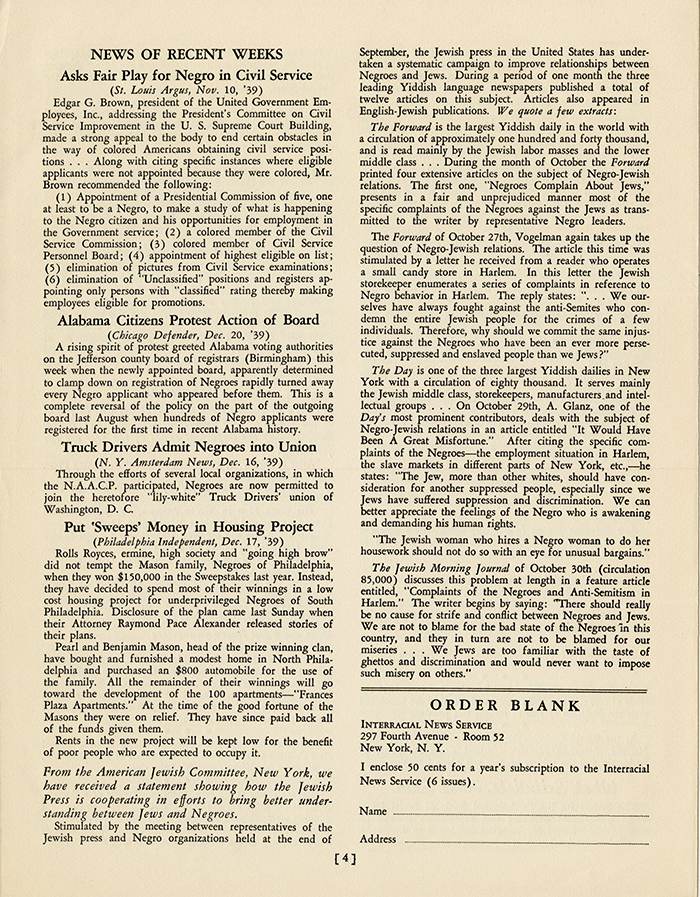 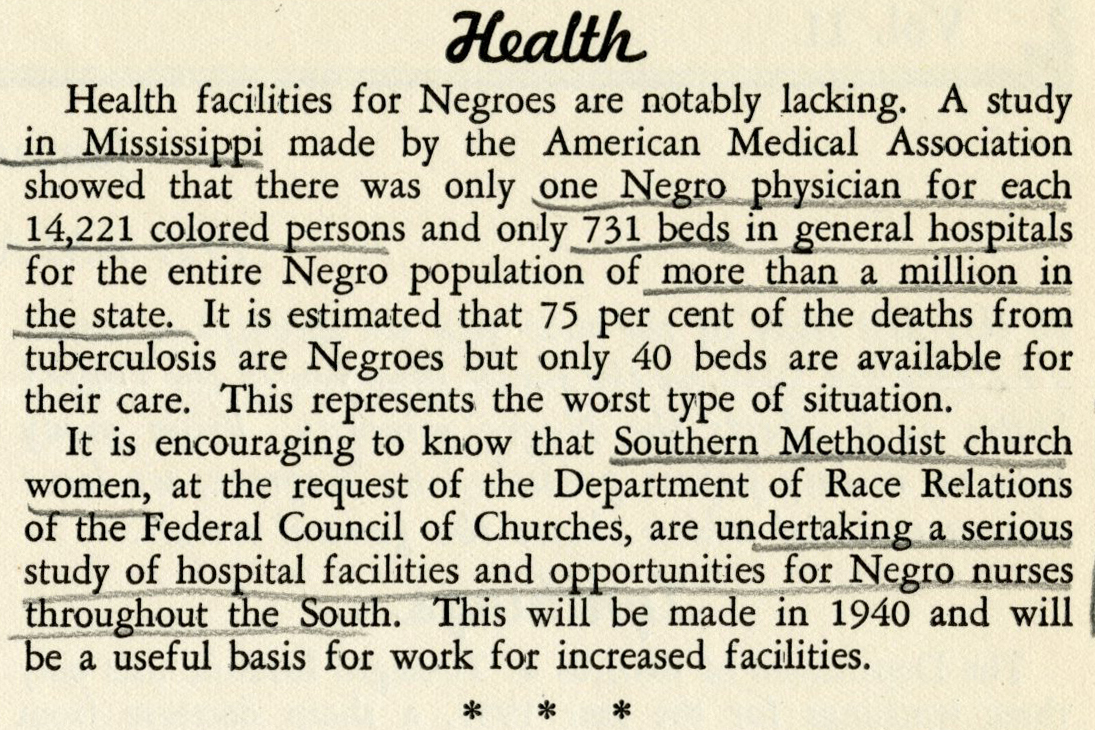 Masthead: "Gleanings from press releases and other sources to inform busy but sincere people of some of the things affecting the lives of racial minorities. Let's do away with walls ! 'We are all one in Christ Jesus.'
The Material in the News Service is given for information and is not to be construed as declarations of official attitudes or policies of the Department of Race Relations or the Federal Council of Churches."

Selected notices:
p. 1 "The Department of Records of Tuskegee Institute lists only three lynchings for the year 1939, a sharp decrease from former years. In eighteen instances law enforcement officers were credited with preventing lynchings, saving twenty-five persons from 'the hands of mobs,'"

p. 2 "The right to vote has been sought with new vigor by Negroes in Southern states. The Klan was revived in an effort to terrify Negroes and keep them from registering in Florida and South Carolina...."

"The refusal of library service was dramatized in Alexandria, Va., where the public librarian called the police to remove five colored youths who sought service in this public institution. Mrs. Mary McLeod Bethune, Director of Negro Affairs for the NYA reported at a meeting of the Southern Education Foundation that only 14 per cent of 509 public libraries in 13 Southern stataes provided service for Negroes."

"Health facilities for Negroes are notably lacking. A study in Mississippi made by the American Medical Association showed that there was only one Negro physician for each 14,221 colored persons and only 731 beds in general hospitals for the entire Negro population of more than a million in the state. It is estimated that 75 per cent of the deaths from tuberculosis are Negroes but only 40 beds are available for their care. This represents the worst type of situation."

"Marian Anderson, internationally known contralto, soared to new heights when she sang to 75,000 and a nationwide radio audience from the steps of the Lincoln Memorial in Washington, after exclusion by the D. A. R. from using Constitution Hall."

"The threatened growth of anti-Semitism has intensified the study of race relations and many church groups have broadened their consideration of race to include this problem."

"The Society for the Psychological Study of Social Issues issued a statement declaring that experiments showed no characteristic inherent psychological differences to distinguish so-called 'races.'"

"From the American Jewish Committee, New York...
Stimulated by the meeting between representatives of the Jewish press and Negro organizations held at the end of September, the Jewish press in the United States has undertaken a systemic campaign to improve relations between Negroes and Jews."