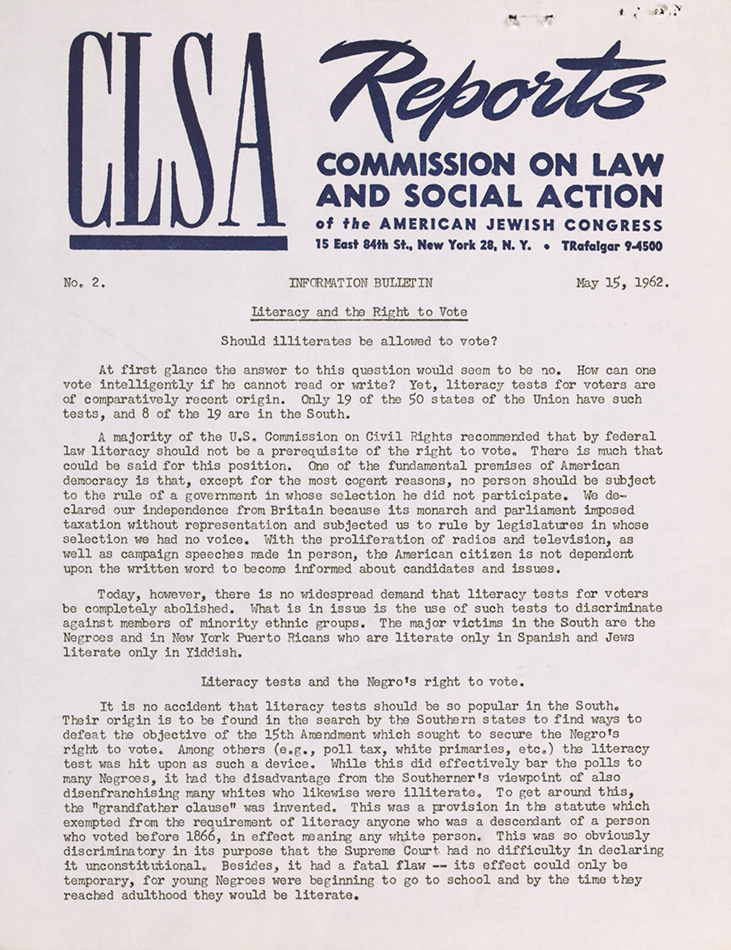 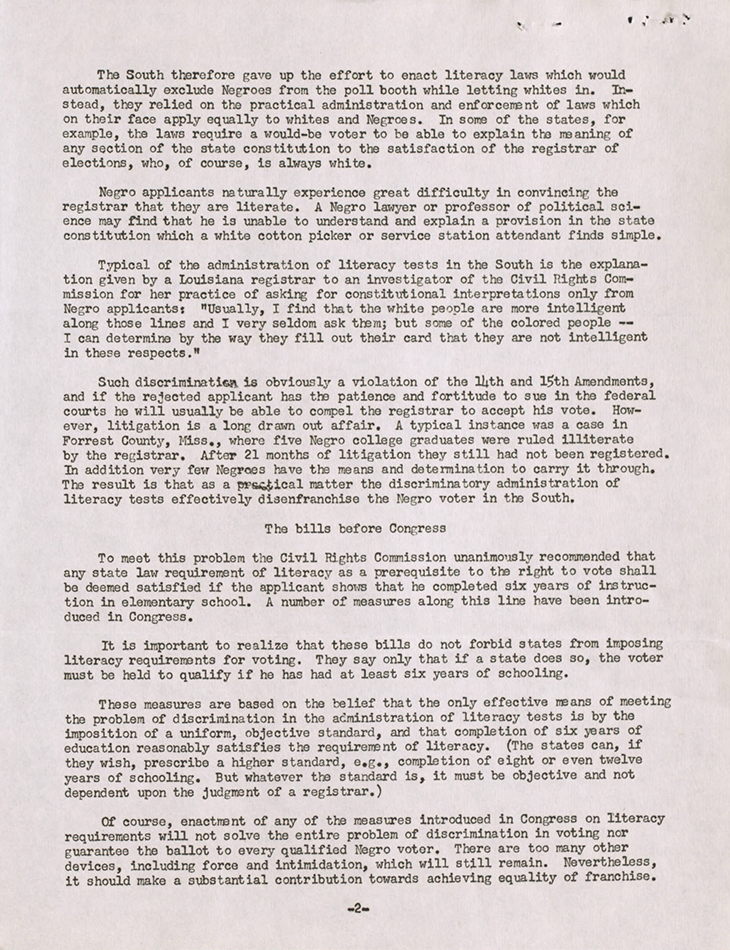 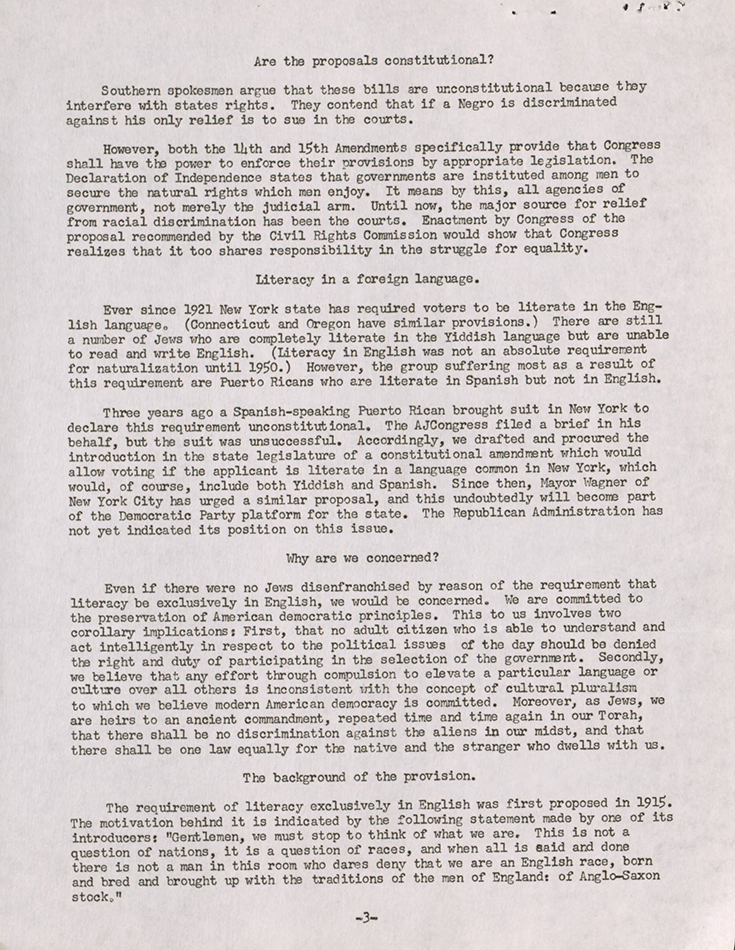 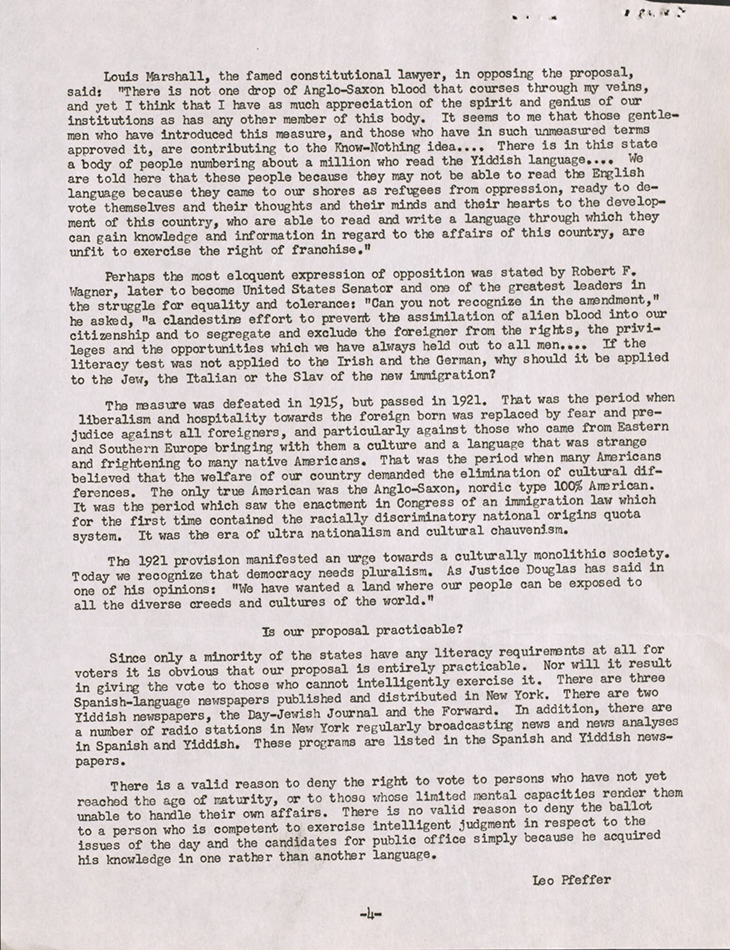 This information bulletin is a publication of the Commission on Law and Social Action of the American Jewish Congress. The four-page document, written by CLSA director Leo Pfeffer, discusses the topic of literacy tests and voter registration, particularly as a tool of discrimination against Black and immigrant voting. Pfeffer also considers literacy in languages other than English.

This American Jewish Congress bulletin is from the National Conference of Christians and Jews, Religious Freedom and Public Affairs Project and is part of a resource files on discrimination in voting. It discusses the use of literacy tests as a means to prevent voting.


Excerpts:
p.1 Today, however there is no widespread demand that literacy tests for voters be completely abolished. What is in issue is the use of such tests to discriminate against members of minority ethnic groups. The major victims in the South are the Negroes and in New York Puerto Ricans who are literate only in Spanish and Jews literate only in Yiddish.

It is no accident that literacy tests should be so popular in the South. Their origin is to be found in the search by the Southern states to find ways to defeat the objective of the 15th Amendment which sought to secure the Negro's right to vote. Among other (e.g., poll tax, white promaries, etc.)  the literacy test was hit upon as such a device. While this did effectively bar the polls to many Negroes, it had the disadvantage from the Southerner's viewpoint of also disenfranchising many whites who likewise were illiterate. To get around this, the "grandfather clause" was invented. This was a provision in the statute which exempted from the requirement of literacy anyone who was a descendant of a person who voted before 1866, in effect meaning any white person.

p.2 Typical of the administration of literacy tests in the South is the explanation given by a Louisiana registrar to an investigator of the Civil Right Commission for her practice of asking for constitutional interpretations only from Negro applicants: "Usually, I find that the white people are more intelligent along those lines and I very seldom ask them; but some of the colored people -- I can determine by the way they fill out their card that they are not intelligent in these respects."

To meet this problem the Civil Rights Commission unanimously recommended that any state law requirement of literacy as a prerequisite to the right to vote shall be deemed satisfied if the applicant shows that he completed six years of instruction in elementary school. A number of measures along this line have been introduced in Congress.

p.3 Southern spokesmen argue that these bills are unconstitutional because they interfere with states rights. They contend that if a Negro is discriminated against his only relief is to sue in the courts.
However, both the 14th and 15th Amendments specifically provide that Congress shall have the power to enforce their provisions by appropriate legislation....Enactment by Congress of the proposal recommended by the Civil Rights Commission would show that Congress realizes that it too shares responsibility in the struggle for equality.


p. 4 There is a valid reason to deny the right to vote to persons who have not yet reached the age of maturity, or to those whose limited mental capacities render them unable to handle their own affairs. There is no valid reason to deny the ballot to a person who is competent to exercise intelligent judgment in respect to the issues of the day and the candidates for public office simply because he acquired his knowledge in one rather than another language.

Commission on Law and Social Action of the American Jewish Congress