Every Man His Own Law [cover title: In those days there was no king in Israel...] 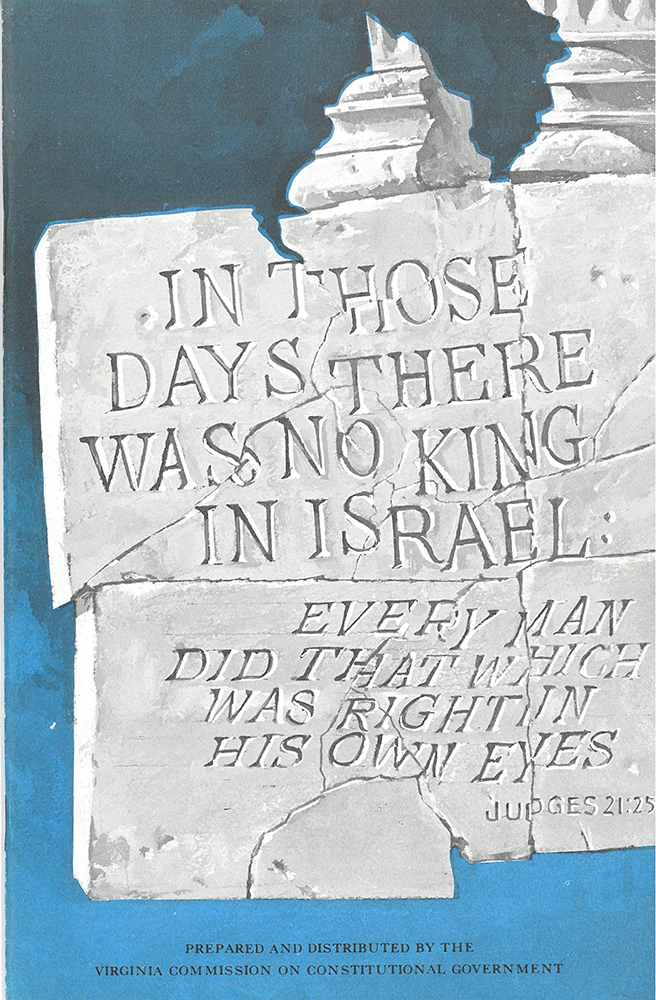 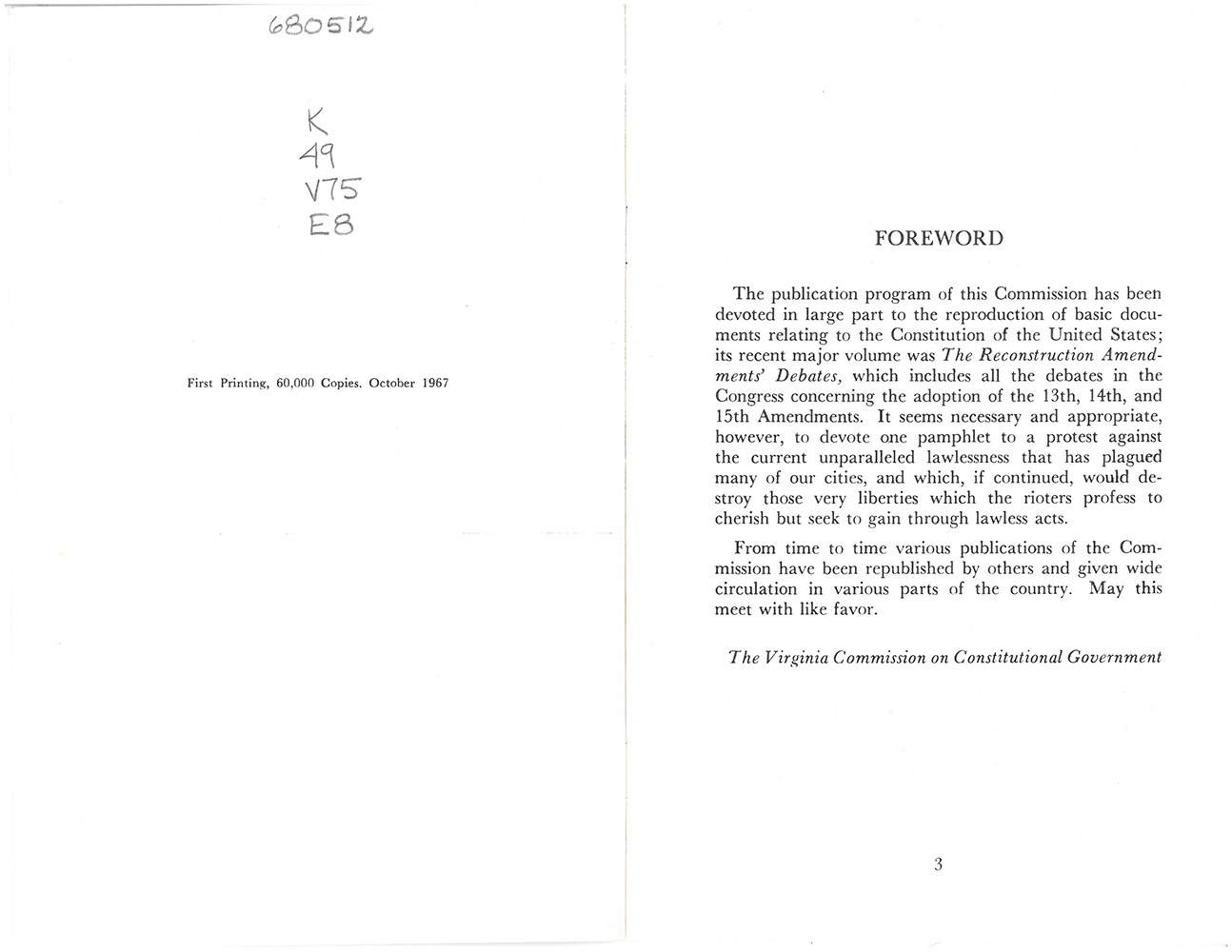 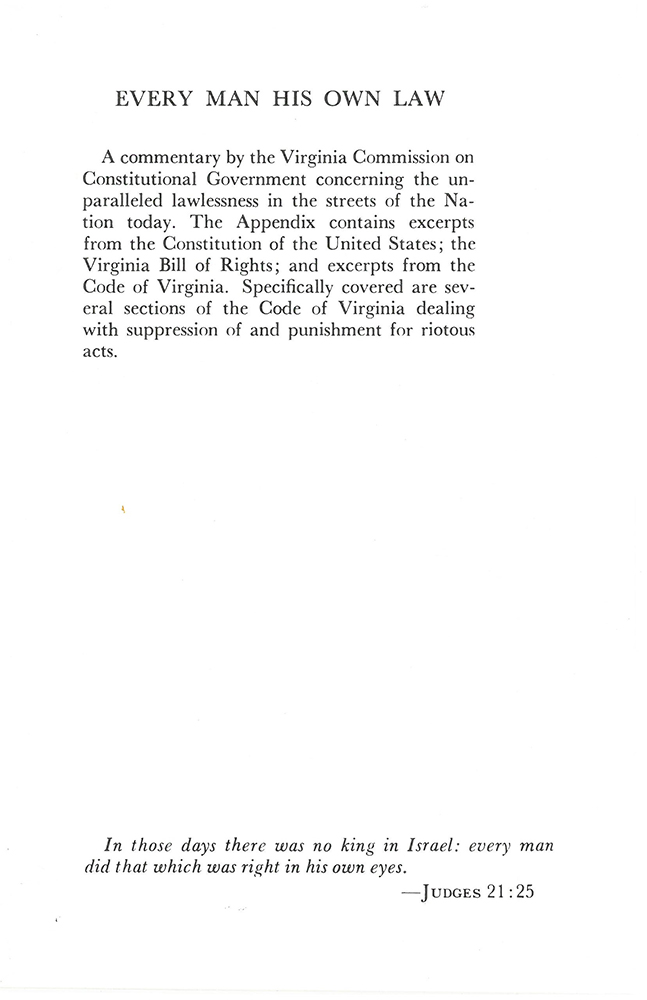 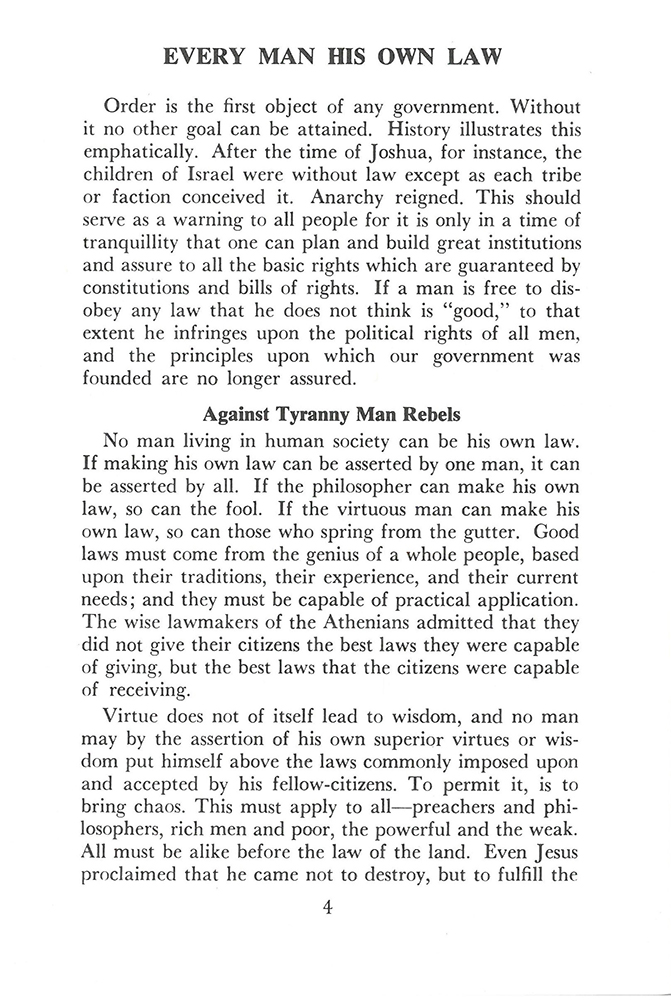 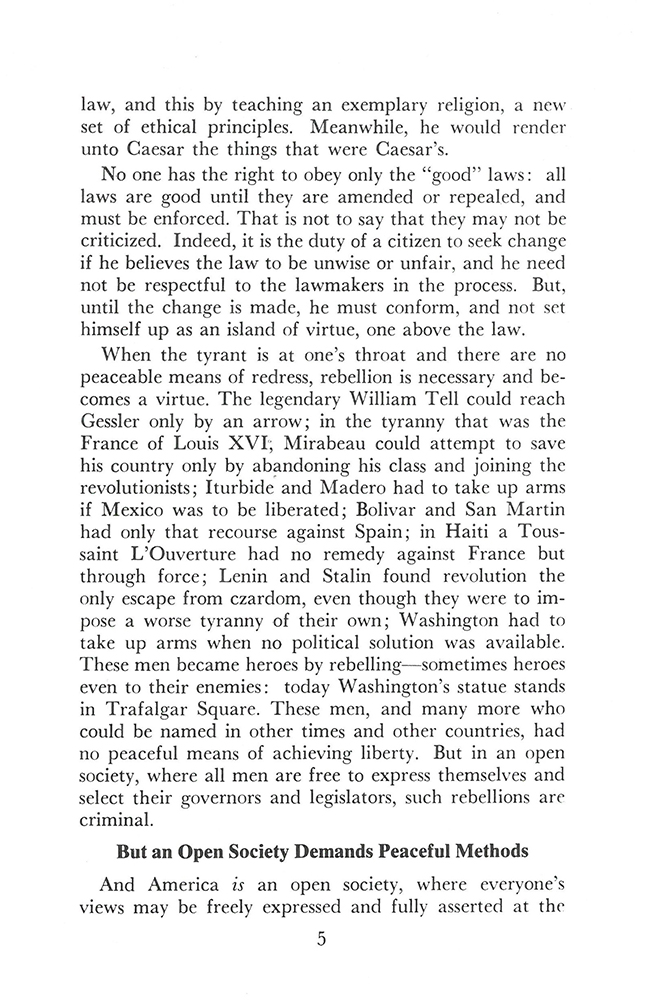 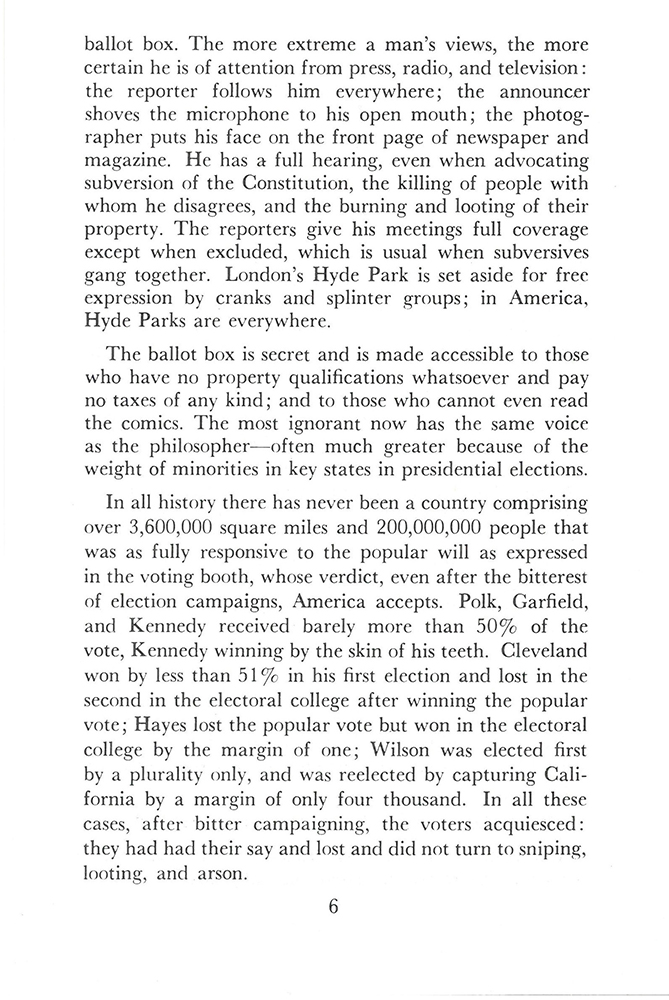 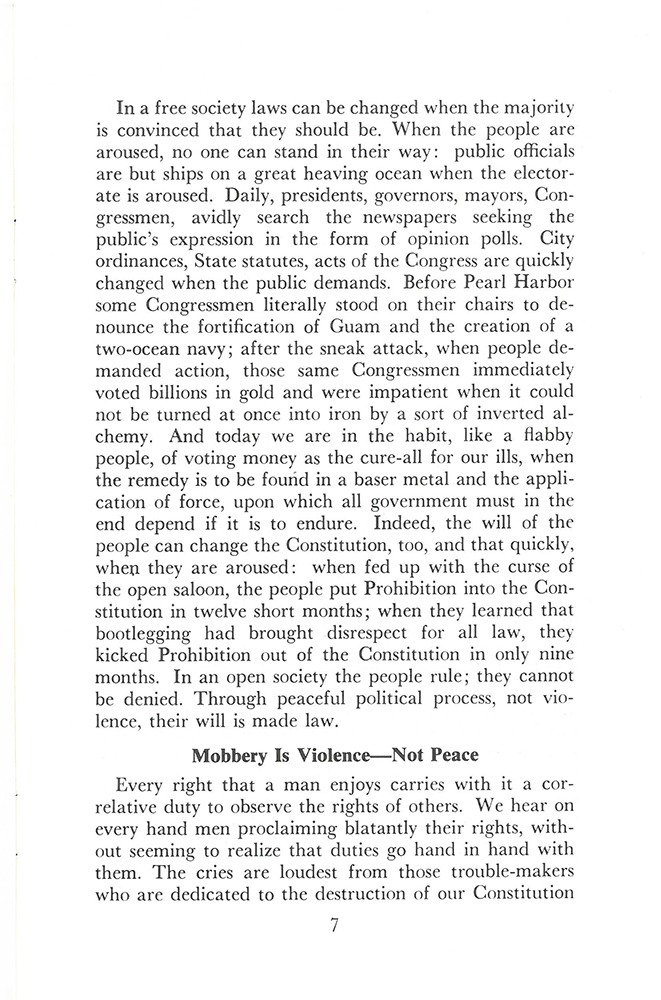 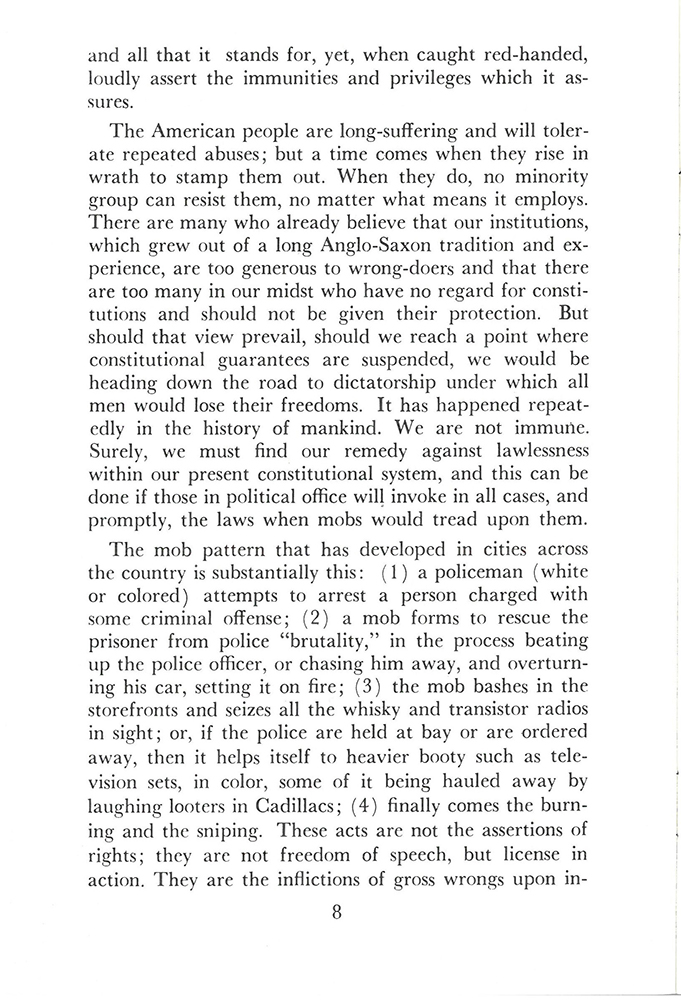 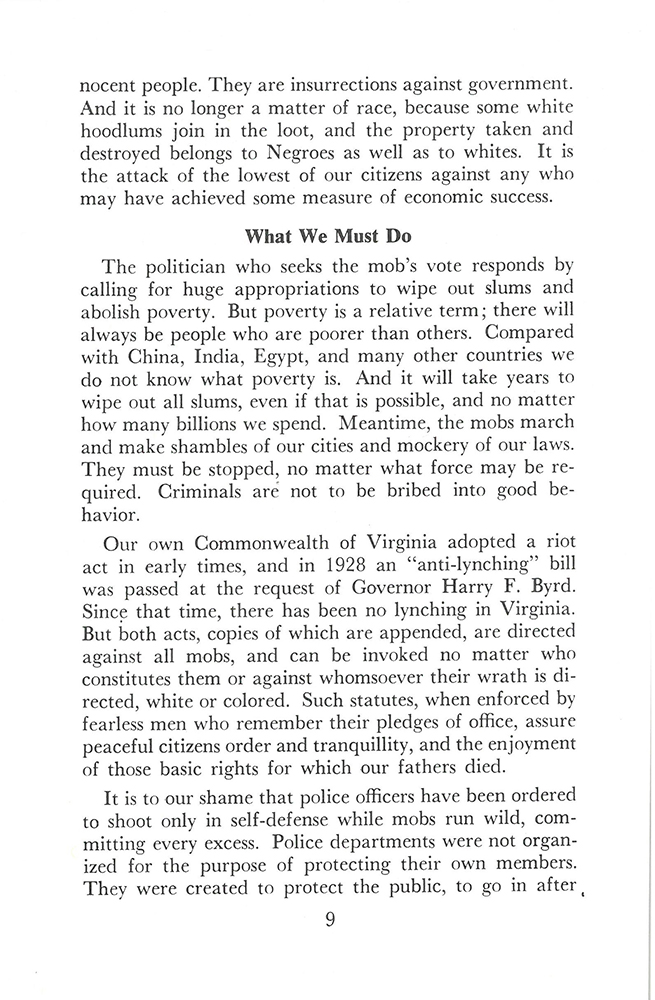 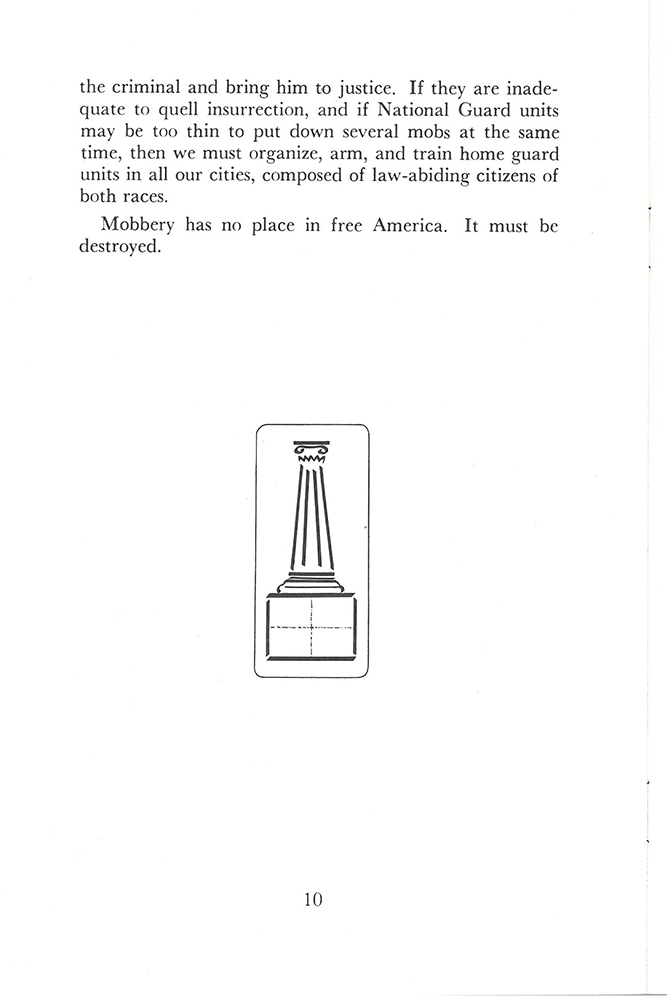 Every Man His Own Law [cover title: In those days there was no king in Israel...]

This booklet was distributed by the Virginia Commission on Constitutional Government (VCCG) .  Led by David J. Mays, a prominent lawyer and advisor to Virginia’s commission on the response to the Brown v. Board of Education decision, it advocated nationally for states’ rights and conservatism, and eventually distributed over 2 million published pamphlets, brochures and speeches. This booklet argues against the Voting Rights Act and describes demonstrations as looting and mobbery.

EVERY MAN HIS OWN LAW.
A commentary by the Virginia Commission on Constitutional Government concerning the unparalleled lawlessness in the streets of the Nation today. The Appendix contains excerpts from the Constitution of the United States; the Virginia Bill of Rights; and excerpts from the Code of Virginia. Specifically covered are several sections of the Code of Virginia dealing with suppression of and punishment for riotous acts.

In those days there was no king in Israel: every man did that which was right in his own eyes. --JUDGES 21:25

Forward: It seems necessary and appropriate, however, to devote one pamphlet to a protest against the current unparalleled lawlessness that has plagued many of our cities, and which, if continued, would destroy those very liberties which the rioters profess to cherish but seek to gain through lawless acts.

p.6 The ballot box is secret and is made accessible to those who have no property qualifications whatsoever and pay no taxes of any kind; and to those who cannot even read the comics. The most ignorant now has the same voice as the philosopher--often much greater because of the weight of minorities in key states in presidential elections.

p.8 The American people are long-suffering and will tolerate repeated abuses; but a time comes when they rise in wrath to stamp them out. When they do, no minority group can resiste them, no matter what means it employs.

p.9 They are insurrections against government. And it is no longer a matter of race, because some white hoodlums join in the loot, and the property taken and destroyed belongs to Negroes as well as to whites. It is the attack of the lowest of our citizens against any who may have achieved some measure of economic success....

It is to our shame that police officers have been ordered to shoot only in self-defense while mobs run wild, committing every excess.

p.10 If they [police] are inadequate to quell insurrection, and if National Guard units may be too thin to put down several mobs at the same time, then we must organize, arm, and train home guard units in all our cities, composed of law-abiding citizens of both races.

Mobbery has no place in free America. It must be destroyed.


Other VCCG publications in the Image Portal

“Every Man His Own Law [cover title: In those days there was no king in Israel...],” Social Welfare History Image Portal, accessed February 2, 2023, https://images.socialwelfare.library.vcu.edu/items/show/556.