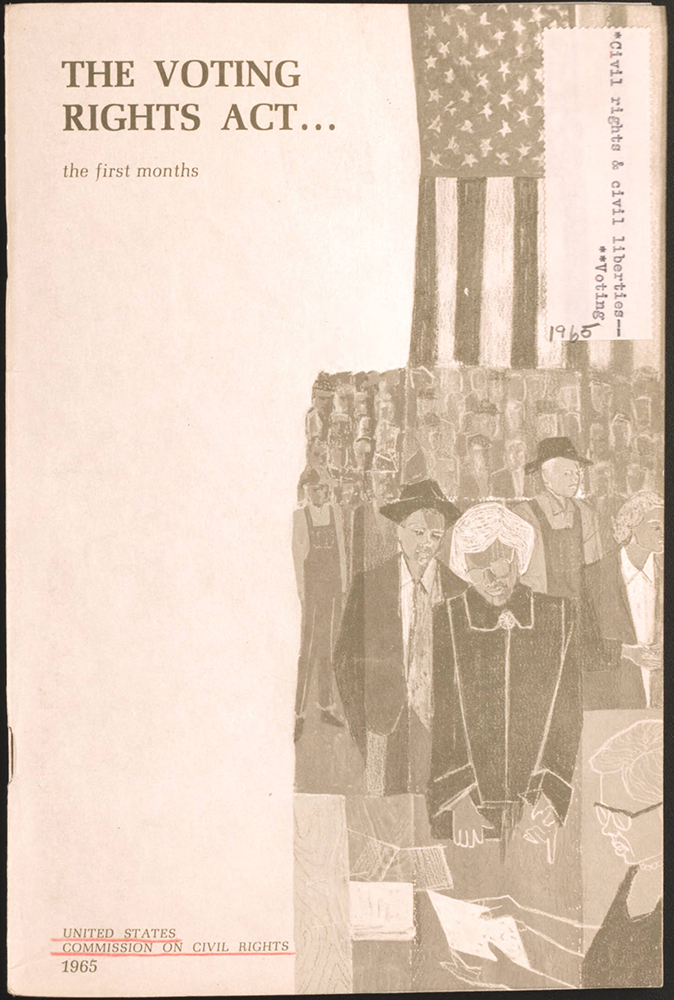 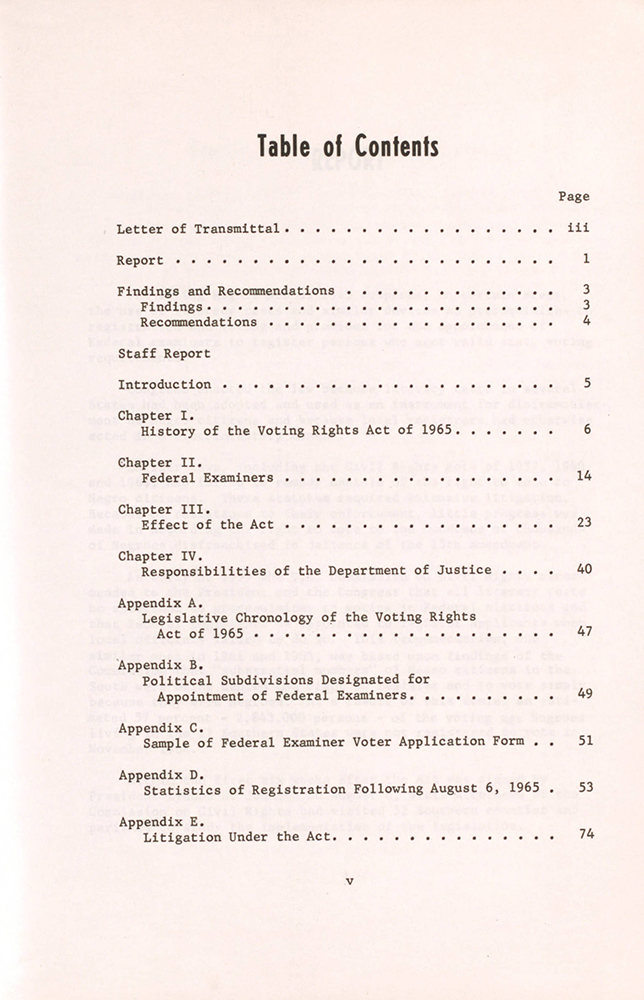 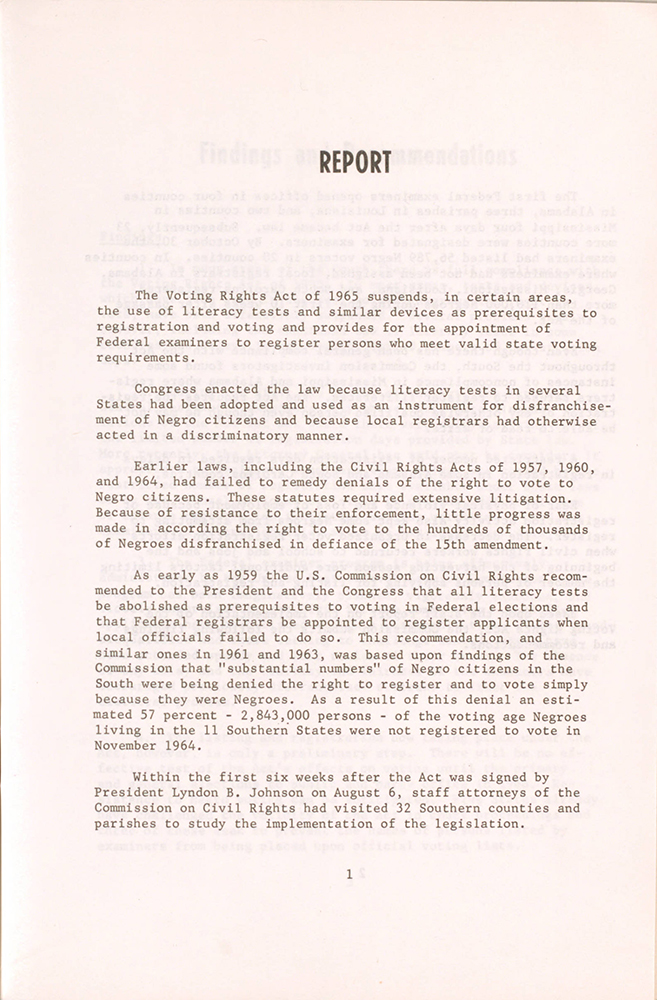 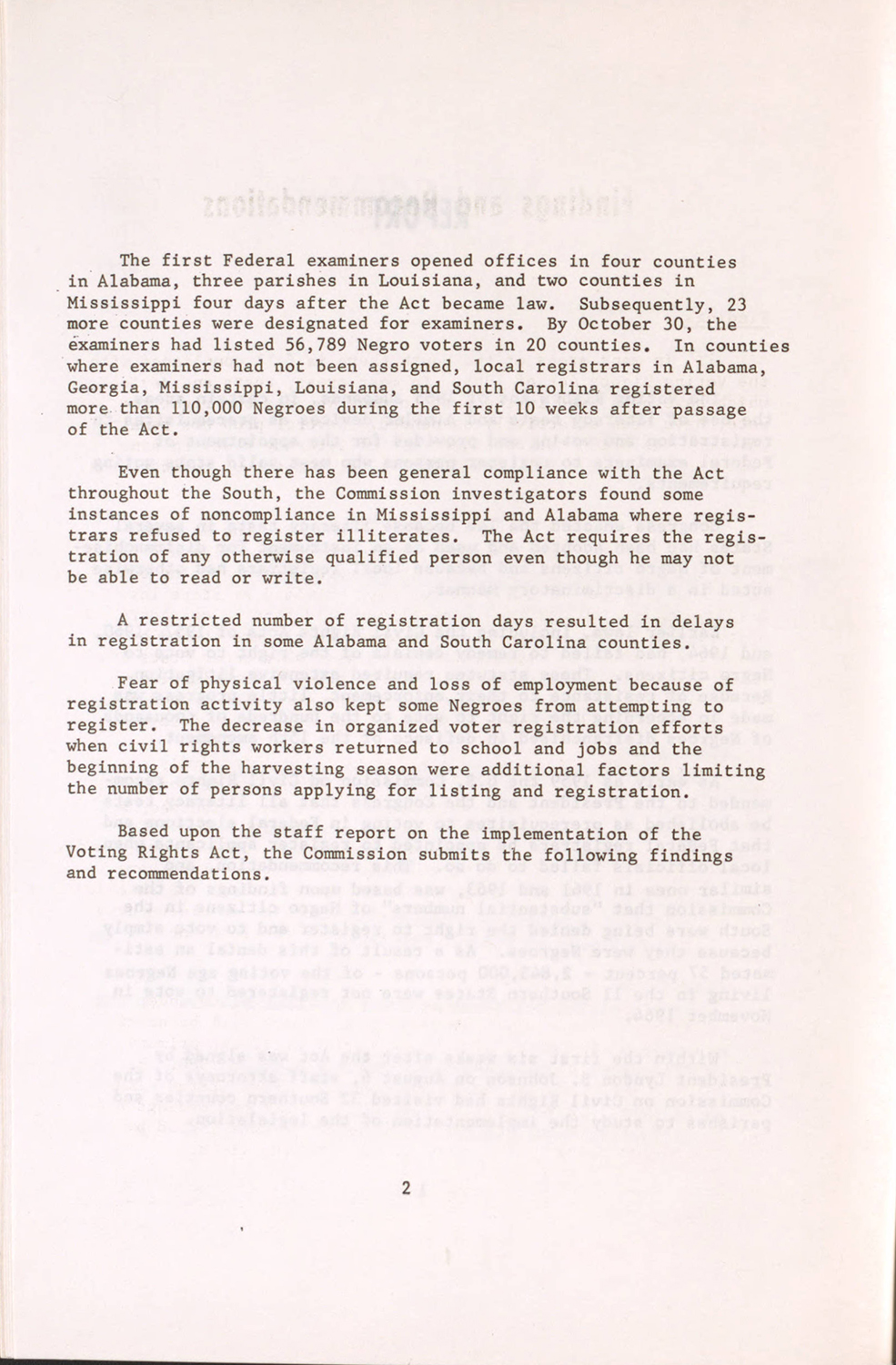 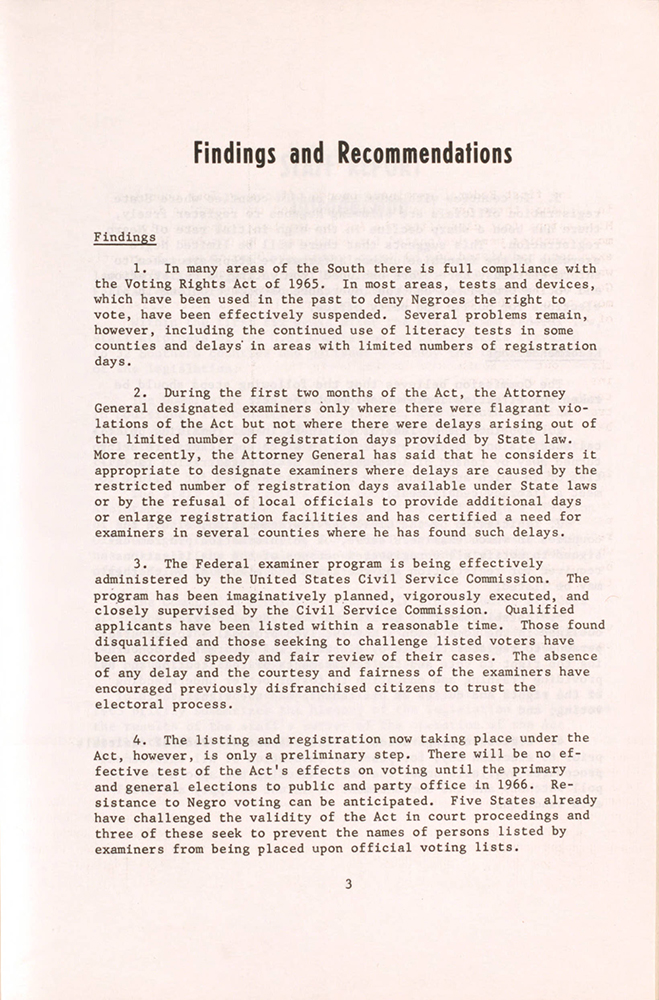 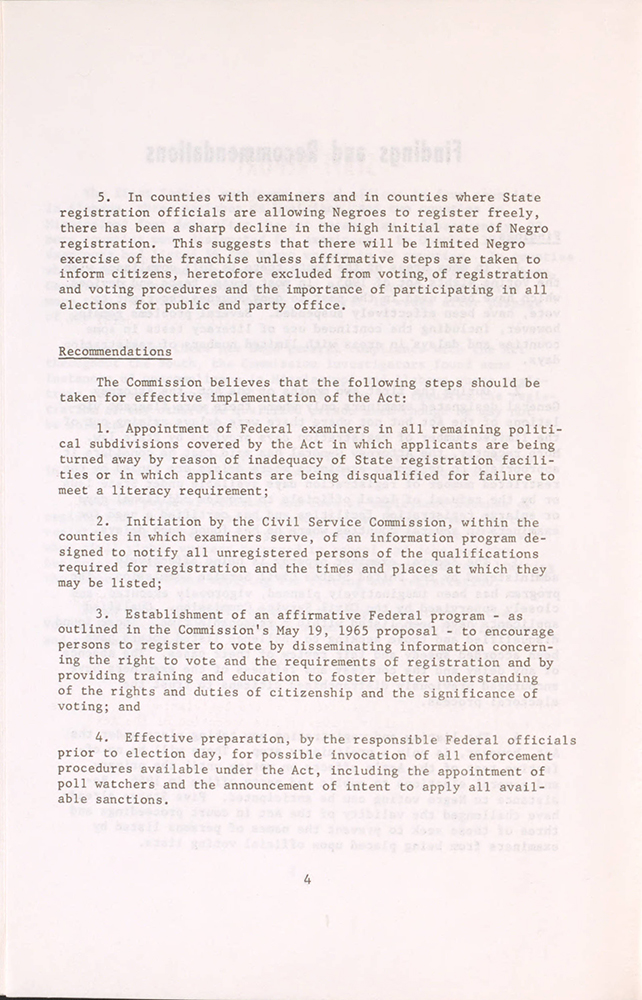 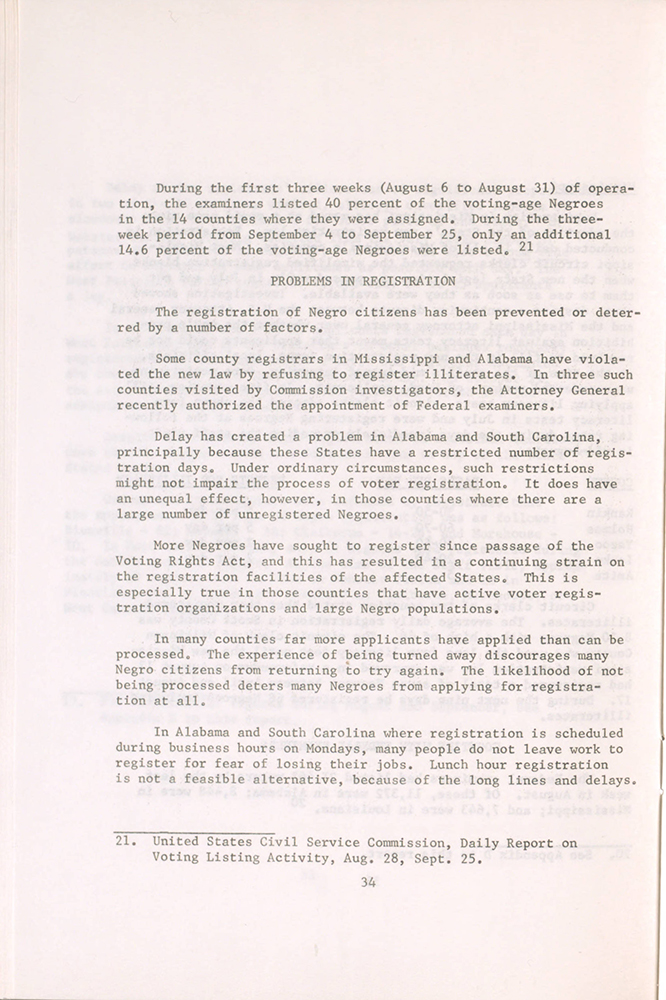 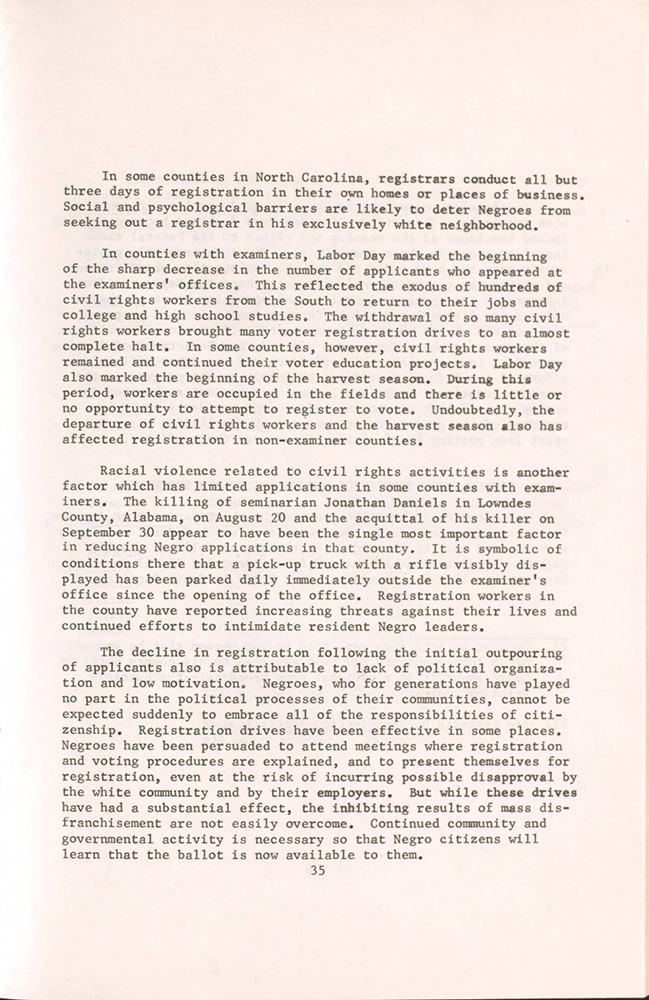 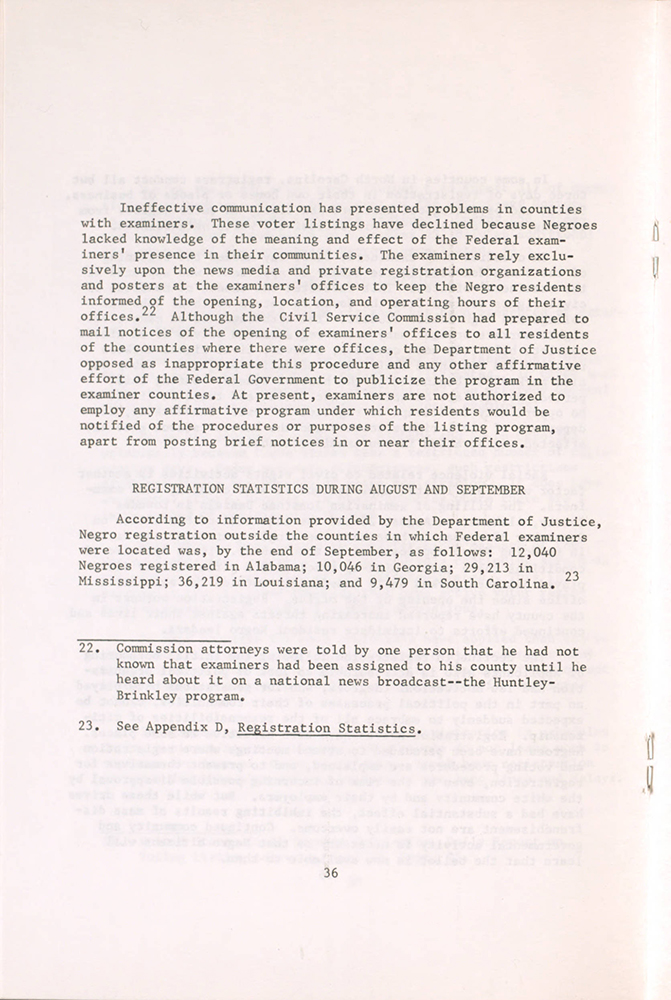 Within the first six weeks after the Voting Rights Act was signed into law, staff attorneys from the Commission on Civil Rights visited 32 Southern counties and parishes to study the implementation of the legislation. This document is their report, transmitted to the President, the President of the Senate, and the Speaker of the House of Representatives in November 1965.

The Commission found widespread compliance, but also a need for further action. Their "Findings and Recommendations," along with the section titled, "Problems in Registration" are presented here.

Read the report's Chapter 1: History of the Voting Rights Act of 1965.

Some country registrars in Mississippi and Alabama have violated the new law by refusing to register illiterates....

Delay has created a problem in Alabama and South Carolina, principally because these States have a restricted number of registration days.

p. 35 In some counties in North Carolina, registrars conduct all but three days of registration in their own homes or places of business. Social and psychological barriers are likely to deter Negroes from seeking out a registrar in his exclusively white neighborhood....

Racial violence related to civil rights activities is another factor which has limited applications in some counties with examiners. The killing of seminarian Jonathan Daniels in Lowndes Country, Alabama, on August 20 and the acquittal of his killer on September 30 appear to have been the single most important factor in reducing Negro applications in that county. It is symbolic of conditions there that a pick-up truck with a rifle visibly displayed has been parked daily immediately outside the examiner's office since the opening of the office. Registration workers in the country have reported increasing threats against their lives and continued efforts to intimidate resident Negro leaders.

This booklet on the Voting Rights Act was part of a resource file on civil rights and voting in the files of the National Federation of Settlements. The Federation was active in community organizing for social justice, voting, and civil rights. The entire document along with a transcript is available via the University of Minnesota Libraries, Social Welfare History Archives.